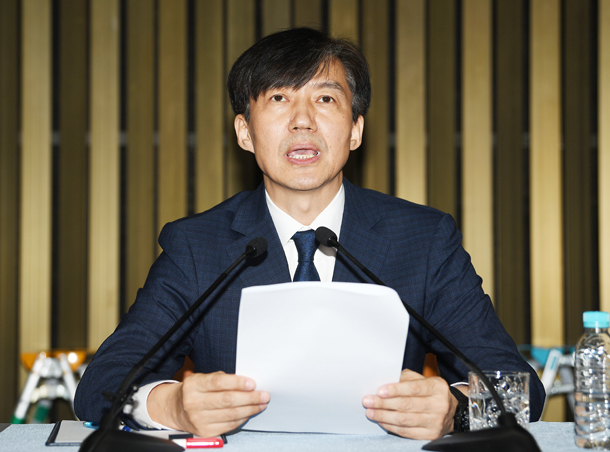 Social media has become a familiar communication tool for people today. In a 2019 internet user survey by Nasmedia, 80.6 percent of the 2000 respondents said they use social media. Even among the group aged 50 and over, three in four people — 75.7 percent, to be exact — use social media. So, an individual’s posts are becoming more influential. A celebrity who posted herself crying on Cy World, the first Korean social media, is still made fun of. I, too, posted pretentious writings on social media when I was younger. As I could not bear to re-read what I wrote, I made them private. Someone with a similar experience would laugh. But if that person becomes a senior government official, you can hardly laugh it off. It raises doubts about whether his or her words can be trusted. It is not illegal, but one can feel regretful.

Controversial justice minister nominee Cho Kuk, former senior Blue House secretary for civil affairs and law professor, was a celebrity with 1 million followers who posted tweets critical of the establishment on Twitter. As he said at a press conference on Sept. 2, “Words that I said in the past are coming back to me.” Some young people like to play an interesting game of finding discrepancies in his words. On foreign minister nominee Yun Byung-se’s daughter receiving a need-based scholarship in 2013 in the conservative Park Geun-hye administration, Cho wrote, “I told my daughter in a private school not to apply for a scholarship.” When offices of former presidential secretary for political affairs Cho Yoon-sun and presidential secretary for civil affairs Woo Byung-woo were raided for search and seizure, he said, “Being a target of an investigation is in itself enough reason to resign.” In a hastily arranged press conference, Cho said he did not know about his daughter’s suspicious scholarship and that his office was not searched. He also said that even if he becomes a justice minister, he would not stop using social media.