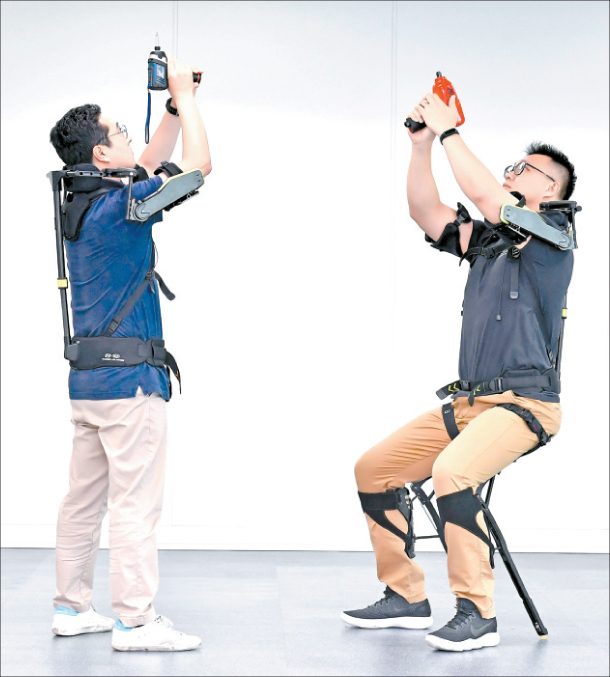 Hyundai Motor Group has created a wearable robot for industrial workers dealing with tasks overhead as it pushes to increase investment in the robotics industry.

The automaker said in a statement Wednesday that the new Vest Exoskeleton (VEX) imitates the movement of human joints to boost load support and mobility, thereby enhancing productivity and reducing fatigue.

To wear the VEX, users place their arms through the shoulder straps of the vest and fasten buckles around the chest and waist. The wearable robot can offer up to 5.5 kilogram-force (12 pound-force) in support, and its size can be adjusted as needed.

“VEX gives workers greater load support, mobility and adaptability when operating in overhead environments,” stated Hyun Dong-jin, head of the robotics team of Hyundai Motor Group. “Workers will also appreciate how light VEX is to wear and work with.”

According to the automaker group, at 2.5 kilograms (5.5 pounds), the VEX is up to 42 percent lighter than competitor products and around 30 percent cheaper than other similar robots, which are usually priced between $4,000 and $5,000 per unit.

Hyundai Motor Group’s mass production of the VEX will begin in December, and the robot could be used at its factories around the world.

The automaker is also planning to market the VEX system to other industries.

The VEX is the latest product of Hyundai Motor Group’s continued investment into robotics.

According to the International Federation of Robots, the global robotics industry has been growing 14 percent per year on average.

The automaker tested a hotel service robot in June and is working to commercialize its retail service robot starting 2021. The company is also in the process of developing a robot that charges electric vehicles and a one-person transportation robot.