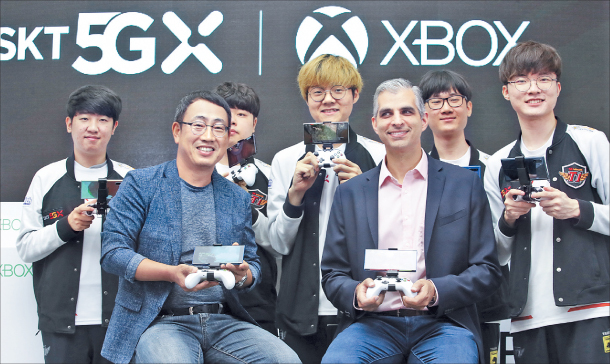 Microsoft and SK Telecom are working together to bring Xbox games to the cloud.

The companies announced Wednesday the test operation of a new gaming platform developed for the 5G network and due to be introduced in October.

Dubbed Project xCloud, the initiative will allow gamers access to well-known titles on Microsoft’s Xbox on mobile phones without having to download an app or a program.

Korea is the first country to run the project, though Microsoft plans to select more markets later.

“We have specifically chosen Korea,” said Kareem Choudhry, vice president of Xbox Software Engineering at Microsoft, in a press briefing at the headquarters of SK Telecom.

After the pilot run, the service will be available to users of other mobile carriers as well. LTE users can also use the platform.

SK Telecom said Korea was selected as a test bed for the new platform due to its strong network infrastructure and the fact that it has the world’s fourth-largest gaming market.

“The gaming population is phenomenal and highly engaged. It is a significant, globally relevant market,” said Choudhry.

The cooperation was born out of the earlier agreement, according to Choudhry. Microsoft and SK Telecom signed a memorandum of understanding in May to cooperate on a set of technologies, including 5G, artificial intelligence, Internet of Things and cloud.

The country’s gaming market was estimated to be 13.1 trillion won ($10 billion) in size last year, with mobile gaming taking up 47 percent of the total, according to data from the Korea Creative Content Agency.

The global market for cloud-based gaming, meanwhile, is expected to reach $2.5 billion in 2023, rising sharply from $387 million in 2018, according to data compiled by London’s IHS Markit.