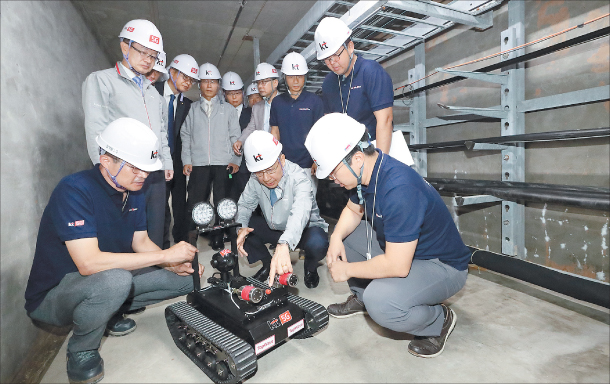 KT CEO Hwang Chang-gyu, second from right in front row, examines a 5G-connected fire-extinguishing robot with company employees at the KT Out Side Plant (OSP) Innovation Center in Daejeon on Wednesday. [KT]

DAEJEON - KT will use its 5G network and even robots to keep its infrastructure free from disasters like fires, the carrier said Wednesday.

“We have been focusing all our efforts into developing technologies for managing our network infrastructure to not make the same mistake again,” said KT CEO Hwang Chang-gyu during a press briefing with reporters held Wednesday at KT’s Out Side Plant (OSP) Innovation Center in Daejeon.

“To operate our [infrastructure] without errors 24/7,” he said, “we applied big data, artificial intelligence, 5G-connected robots and drones in infrastructure management.”

When the Korea JoongAng Daily visited the KT OSP Innovation Center Wednesday to witness a demonstration, a 5G-connected robot doused a fire using an aerosol spray after sensing an unusual rise in temperature inside an underground cable tunnel. Another 5G-connected robot opened up a manhole cover using magnets and pumped out water.

The Daejeon facility was built in July to develop and test new technologies for telecommunications infrastructure management.

The 5G-based fire-extinguishing robots work on KT’s own cable tunnel temperature remote sensing technology, according to the carrier.

The company said it set up special optical cables in the tunnel to detect temperature changes.

Two fire-extinguishing robots were mobilized. One glides along a rail on the ceiling, while the other moves on the ground.

The manhole-managing robot moves autonomously to sites with problems. According to KT, it uses optical cables to monitor sound waves inside a manhole and compares them with normal sound patterns. It uses artificial intelligence and big data for analysis.

The robots are not actually deployed yet, but Oh Sung-mok, president of KT’s network division, said they could be in two or three years’ time.

Asked whether the disaster robots themselves will be vulnerable to a breakdown in the 5G network, Oh said KT will set up a network for disaster relief that is separate from the commercial 5G network.

A KT spokesperson also emphasized that the robots are meant to prevent disasters from happening in the first place by detecting signs of danger.

KT has also introduced an integrated system to manage all of its telecommunications infrastructure nationwide called the advanced tunnel and cable management architecture (Atacama).

While the company used to operate seven different systems to take care of different infrastructure including base stations, cable tunnels, telephone poles and manholes, Atacama manages the entire infrastructure at once, Oh said.

With the system, the company can plan new routes to establish optical cables in just five minutes compared to some 100 minutes in the past, KT said. It also reduces the time needed to find a network infrastructure error from 48 minutes to 10 minutes, according to the company.