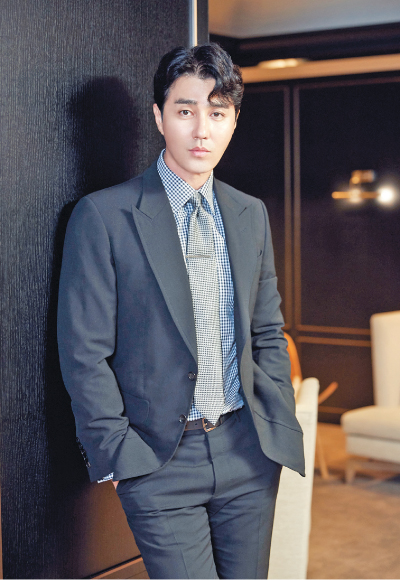 After 12 years away, Cha Seung-won has returned to comedy. But his latest film “Cheer Up, Mr. Lee” might have audiences reaching for tissues instead of doubling over in laughter.

The film tells the story of the extremely handsome and muscular, but dim-witted Cheol-soo, who is beloved by everyone in his town. However, he discovers one day that he had fathered a daughter named Saet-byeol, and she’s sick, suffering from leukemia.

This is no typical father-daughter bonding story, as it covers the 2003 Daegu subway fire tragedy that resulted in 192 deaths, 21 missing persons, and 148 injures due to the fire that arose from Jungangno station, line No. 1. Later in the story, it is discovered that Cheol-soo’s lack of intelligence is actually a form of trauma from the fire.

“I want this film to do well [in the box office] because of the director Lee Gae-byok,” Cha said in an interview with the Korea JoongAng Daily. “The style of each film reflects the personality of the director, and the film is pure and sincere like Lee.” The actor met with the press at a cafe in Samcheong-dong, central Seoul, to discuss his upcoming film, slated to premiere on Sept. 11.

Q. It’s possible that viewers expecting a good old laugh may feel betrayed by the twists in the story. Are you worried?

A. I actually am. But I think the majority of the people would feel the same way that I did when I played my character Cheol-soo, because the film expresses gratitude to those working hard to ensure people’s safety but are hidden from the mainstream. The film has pure intentions - it’s not degrading, distorting or defaming these people. Instead, it sheds light on the work they do and how the society appreciates them [and the sacrifices they make] to save lives.

Why do you want this film to do well in the box office because of the director?

What part of the character or story made you take on the role?

I wasn’t aware that I haven’t done a comedy in 12 years. But I think it was more about the character and his relationship with his daughter that lured me in [rather than the genre.]

All of us have some faults or deficiencies, whether or not they can be seen or hidden from the surface, right? [In the story], at first it looks like the dumb father and the sick daughter would be of no help to each other in this harsh, cruel world.

But they slowly figure out that they can rely on each other and help each other out. Although Cheol-soo became less intelligent, he can still protect and support his daughter in his own way. [When I read the script], I thought “at the very least they won’t be lonely because they are together.”

There is a scene where Cheol-soo feels helpless because it seems like there is nothing he can do to help his daughter. But for Saet-byeol, her world has become a better place with him in it.

Did you have any difficulties adapting to the different atmosphere in the latter half of the film?

I can’t say that it wasn’t difficult. I did a lot of research, looking up YouTube videos and documentaries about people who suffer from traumatic events. And since the mood in the latter half of the story is different, it was hard to adjust that to the character too. But I concentrated more on the first part of the story, setting the tone of the character and fitting into the role before Cheol-soo tackles his past later.

Why do you think you stayed away from comedy for so long?

I don’t know why. I guess it just happened that way. But I actually love black comedies and humorous characters with faults. I don’t know if it’s because I’m that kind of person, but I feel more attached to such characters than darker ones. That doesn’t mean I dislike darker characters though. But people nowadays seem to prefer stronger films that can offer certain catharsis or excitement through a series of action sequences that they won’t be able to experience in real lives. I mean, I know how to pose and play characters that appear in these types of scenes, but I still love to portray characters with their own faults that also provide warmth to viewers.

But there is one genre I cannot do at all: horror films. I can’t even see images from horror movies, because they constantly pop up in my mind. Films like “Gonjiam: Haunted Asylum” (2017) are so horrifying.

Do you think your personal experience as a father comes out in your portrayal of Cheol-soo?

I believe so. I think that myself as a father with my love for my own daughter was portrayed in the film. I can’t deny that.

My next film is also a comedy (tentatively titled “Sink Hole”) but the film after that might be very dark. As I’ve said before, I like all types of films but when I play a strong or cold-blooded character, I do feel a bit hesitant to say yes to the darker roles because I also think about my own daughter [watching the films]. But for this year’s Chuseok holiday, I think we’ll be fine (laughs).