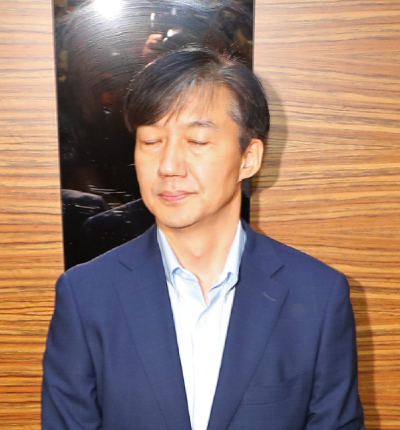 Dongyang University denied that it ever gave an award to the daughter of justice minister nominee Cho Kuk, although she cited the honor in her medical school application, the JoongAng Ilbo reported Wednesday.

The Seoul Central District Prosecutors’ Office has been investigating the allegation that Cho’s 28-year-old daughter committed admissions fraud by submitting unauthentic documents when she applied to the Graduate School of Medicine at Pusan National University (PNU) in 2014. A series of raids took place last week and earlier this week to verify the materials she had included in her application.

The daughter of the controversial cabinet nominee currently attends that school.

After confirming that Cho’s daughter submitted an award for her volunteer activity issued by the president of Dongyang University, prosecutors raided the school on Tuesday. Cho’s wife, Chung Kyung-sim, has been working as an English professor at the school, located in Yeongju, North Gyeongsang, since 2011.

Investigators raided not only Chung’s research office, but also other administrative offices of the university, based on the suspicion that the award was not authentic.

“I have never approved or given such an award,” Dongyang University President Choi Sung-hae told the JoongAng Ilbo on Tuesday. Choi has been the university’s president since 1994.

“Investigators from the prosecution showed us an award that Cho’s daughter had supposedly received from our school,” an official of Dongyang told the JoongAng Ilbo. “But its serial number and format were different from ours.”

A senior official said the award shown by prosecutors carried an official seal of the university president. “But our archive had no record of giving the award to her,” he said. “The prosecution confirmed that and took photos.”

Legal analysts said if Cho’s daughter lied about or exaggerated her accomplishments in the application and if her mother, Chung, was involved in the process, the two can be prosecuted as co-conspirators on charges of obstructing a university’s admission process.

While the media has been raising questions about much of the daughter’s academic career, starting with a high school internship and admission to Korea University in 2010, the prosecution is concentrating on her admission to the medical school, as the seven-year statute of limitation for the obstruction of business charge hasn’t expired. She applied for the program in 2014 and started her first year in 2015.

After studying for two years in the United States, Cho’s daughter entered Hanyoung Foreign Language High School in 2007. In 2010, she entered Korea University through an early admission program earmarked for “global leaders.” In 2014, she entered the Graduate School for Environmental Studies of Seoul National University (SNU), where Cho has taught law since 2001. She entered PNU’s Graduate School of Medicine in 2015.

“If Professor Chung created the award without the president’s approval or fabricated it, and if the causal relationship between the fake award and her daughter’s admission to the medical school is proven, Chung can be prosecuted for obstruction of the admission process,” lawyer Shin Il-soo, a former judge, said.

The university said on Wednesday that it will conduct an internal probe. “Earlier in the morning, I ordered department heads to create a fact-finding team,” Dongyang President Choi told the JoongAng Ilbo. “The probe will look into not only the award, but also a suspected role of Professor Chung.”

The team will also investigate the operation of an English education center for gifted students managed by Chung. According to university officials, the center published a book on English-language education a few years ago with state funding, and Cho’s daughter served as an assistant to the project.

Cho said Wednesday that the latest allegations about his daughter are groundless. “My daughter did teach English to middle and high school students at the center,” Cho said. “And she received the award for it. You can easily confirm it.”

It was the first time that he addressed the public since an 11-hour press conference on Monday to deny almost all allegations surrounding his daughter’s academic career and the family’s wealth management.

Cho also addressed another scandal involving his daughter’s internship at the Korea Institute of Science and Technology (KIST). “I do not know the details,” Cho said, adding that the prosecution’s investigation will unveil the truth.

The DongA Ilbo reported Wednesday that the daughter, when she was a sophomore at Korea University, worked for two days as an intern for KIST, but lied in her application to the medical school about having completed a three-week internship. The internship was arranged by her mother.

Chung asked a friend, who was a researcher at the KIST, to admit her daughter as an intern. She was assigned to assist another researcher in July 2011. She only showed up for two days and missed the rest of the program, citing “personal reasons,” the newspaper said.

KIST entry logs showed that she only entered the building on two days.

She was never given an official certificate, but she still cited the internship in her application for the PNU medical school in 2014. She wrote that she had worked as an intern for three weeks at KIST when she was a freshman at Korea University, not sophomore.

KIST said Wednesday that it conducted an internal investigation and concluded that its researcher, who was a friend of Chung, created a fake internship certificate. The institute also said it will punish the researcher for the misconduct.

“Cho’s daughter originally signed a contract to work as a student researcher for one month, but actually showed up for two days,” said a KIST official. “She later received a certificate saying she worked for three weeks.”

“This is unthinkable. A certificate must have been issued by the institute, not an individual researcher, but that was not the case,” he said. “As such an illegal activity was revealed, we will punish him.”

The prosecution raided KIST last week. After the raid on Aug. 27, the prosecutors asked the institute to keep quiet about it.

The prosecution also probed the daughter’s admission to Korea University in 2010, although the statute of limitation has already expired for any obstruction charge. She was accused of having been wrongly cited as the first author of a paper published in the Korean Journal of Pathology in 2008 after a two-week high school internship and using that accomplishment to gain admission to the university.

Chang Young-pyo, a professor in the Department of Medical Science at Dankook University, who listed Cho’s daughter as the first author of that research paper, was interrogated by prosecutors for 16 hours on Tuesday.

It is possible that her undergraduate admission to Korea University could be retrospectively voided if the investigation concludes any misconduct.

Meanwhile, students are planning more candlelight rallies to protest Cho’s appointment as justice minister and demand the truth about the admissions fraud scandal.

The Student Union of SNU said it will hold a press conference today to demand Cho’s abandoning of his nomination. It said students will hold a protest - the third of its kind - on Monday. The protest was scheduled for next week to avoid bad weather.

Korea University students are also planning a rally on Friday.