Everything has gone wrong for Ryu Hyun-jin

Everything has gone wrong for Ryu Hyun-jin 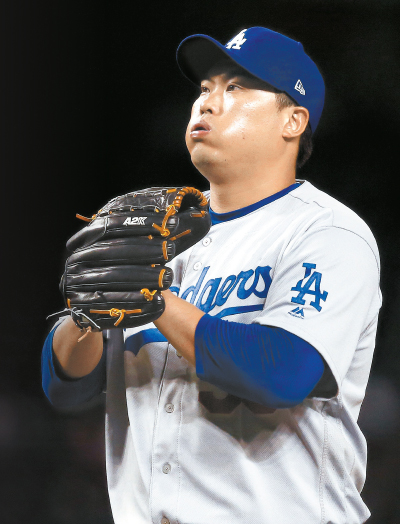 Ryu Hyun-jin of the Los Angeles Dodgers once again failed to pick up his 13th win of the season, walking away with a no-decision from a game against the Colorado Rockies at Dodger Stadium on Wednesday.

In four and one third of an inning, Ryu gave up six hits, three runs and four walks, while striking out five.

However, Ryu started to struggle in the fourth inning as he kicked things off with a walk to Nolan Arenado. After grounding out Ian Desmond, Ryu gave up an RBI two-base hit, to Ryan McMahon. Ryu struck out Raimei Tapia, but as he gave up a walk to Garrett Hampson and another hit to Drew Butera, the Rockies were able to cross home plate again.

Returning to the mound at the top of fifth, Ryu continued to struggle. He first struck out Trevor Story but as he gave up hits to the next three Rockies batters and another run, Ryu left the mound and Adam Kolarek was brought in.

Although Ryu gave up three runs, the Dodgers won the game 7-3. As Ryu didn’t toss a full five innings, he wasn’t able to pick up the win.

With a no-decision, Ryu’s statistics remains at 12 wins and five losses with a 2.45 ERA for the season. As his ERA went up again, Ryu continues to move further away from the coveted Cy Young award.

In addition to Ryu’s pitching statistics, with a hit, he now has a 0.241 batting average for the 2019 season.

Up until the game against the Atlanta Braves on Aug. 17, Ryu was having the best season of his career and was a dominant pitcher in the majors as he was the only pitcher to have his ERA below 2.00. Although Ryu kept his ERA below 2.00, his struggle in terms of performance started with that game against the Braves. During the game, Ryu gave up four runs throughout five and two thirds of an inning.

Ryu hoped to bounce back during a game against the New York Yankees on Aug. 23, but instead he picked up his second straight loss. By giving up seven runs in four and one third of an inning, Ryu picked up his fourth loss of the season and his ERA jumped up to 2.00.

Then, Ryu once again picked up a loss this time against the Arizona Diamondbacks by giving up another seven runs in four and two thirds of an inning. In his past four games, Ryu has given up 21 runs.

Looking back at his performance at the beginning of the season, Ryu was a different player. He started in the Dodgers’ opening game and picked up a win, becoming the first Korean pitcher since Park Chan-ho in 2001 to do so.

Continuing his streak, Ryu also earned an All-Star selection, becoming the fourth Korean major leaguer to do so. On July 9, Ryu added to that accolade by becoming the first Korean pitcher ever to start in an All-Star Game.

Also, when Ryu got his 12th win of the season, during a game against the Diamondbacks on Aug. 11, he achieved another milestone, his 150th career win. Ryu has picked up 98 KBO wins and 52 MLB wins since he debuted for the Hanwha Eagles in 2006.