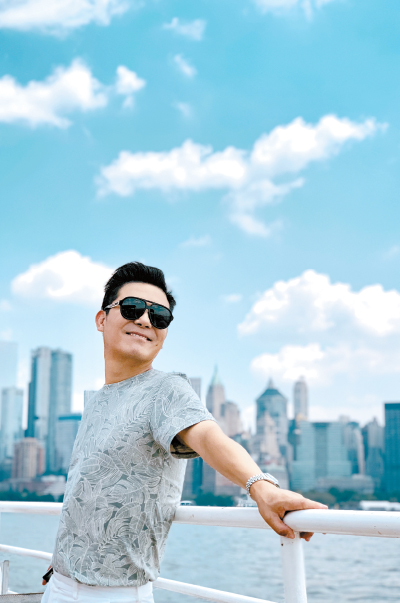 Singer Im Chang-jung released his 15th full-length album today. The photographs in his album, such as the one above, were taken by his wife with her smartphone earlier this year. [YES IM]

Singer Im Chang-jung holds the title as the only artist in Korea to have songs that reached No. 1 on the local music charts in the 1990s, 2000s and the 2010s, and he’s more than capable of expanding that record in the 2020s. Nearly 30 years into his career as an actor and 24 years as a ballad singer, Im releases his 15th full-length album “Never Ending” today, expressing his hopes for a never-ending career that he’s worked so hard for.

“It’s just always so fun,” Im said during an interview on Wednesday held prior to the release of the album. “It’s fascinating to see how I hum a certain melody, then it comes back with the piano, with other instruments, as a demo, with the guide and finally as a song. Every time that happens, it’s always so exciting and fun.”

While “Never Ending” is an album title that contains Im’s hopes to prolong his career, the Korean name of the album translates to “13th Month,” a month that neither has a name nor a presence on the calendar.

“Just as we don’t have a 13th month, there’s love that will never happen,” he said. “The song is about love that will never come true. That was the intention of the song. Then I realized that there 12 other songs in the album, so they could be arranged in the order of the months. You know, like the radio. On the first day of the new month, like March for instance, they’d say, ‘March is here, and we have for you Im Chang-jung’s ‘March.’”

The album is arranged so that the 13 tracks follow the months on a calendar, and the title track “Never Ending” is the 13th track of the album. The album’s two instrumental tracks bring the total to 15 tracks, “which made perfect sense,” according to the singer.

Im is known for having written many of his hits by himself, such as the lyrics for his hit “Soju Hanjan (A glass of soju)” (2003), but for this album, he took a step back to make sure that the songs were trendy enough to appeal to younger listeners. The biggest change came with rearranging the songs, because that’s what he believes gives music the touches that younger singers can relate to.

“You don’t want to use old wrapping paper, you want to use [the paper] that younger people like as well,” he said. “Before making the album, the initial thought was that I wanted to be different. I know that I can only be Im Chang-jung, but within that boundary, I wanted to do as much as I could. I usually take part in making 80 percent of the songs, but with this album I only wrote lyrics for six songs and didn’t compose any of the songs.”

He even recently wrote a song for rookie singer Kim Jae-hwan titled “Begin Again,” which he doesn’t usually do, but he accepted the opportunity before anyone else could take the chance from him.

“When I heard the way he sang it, I couldn’t believe that it was the voice of a person in his 20s. It felt so deep and experienced. It was amazing to hear that he had such different ideas on how to sing my song,” he said.

“You know how there are different styles of coffee, like Americano or caramel macchiato,” he added. “But they are all coffee-based. And ballads are the base of music. It’s a genre of music that’s the most comfortable for people to listen to, regardless of when and where. It was good back then, and it’s good now. It never really goes out of fashion because it’s not at the center of it. It’s safe and it can happen every year. I actually met singer Yoon Jong-shin a few days ago, and we laughed so hard with each other, saying, ‘We’re so lucky to do this for so long.’”

And true to his words, his songs still carry that iconic Im Chang-jung sound, with his powerful and emotional voice, but it’s different from the past. Not only is it because of the different styles of the songs, Im’s singing method has changed with time.

“I don’t think I’ve changed that much musically,” he said. “But my voice has become different, and my singing method definitely has changed. I used all of my throat in the past, because I could - I was young. But now, I do it so that it’s a lot more comfortable for me to sing, but you can’t tell the difference,” he said.

The album’s third track, “Dear You,” is a song Im wrote while thinking of his wife - who will soon give birth to his fifth child. According to the singer, he keeps notes of the subtle emotions and thoughts he gets in his everyday life and later uses them for his songs, which was the case for “Dear You.” He and his wife went traveling earlier this year and he thought of the lyrics at the time. Additionally, the photographs featured in the album were taken by his wife.

“We took the photos for ourselves, not for the [album]. We just took our iPhones and took hundreds of pictures. We tried using [amateur] pictures in my 14th album and we tried it again for this one as well. This time, when I was in the United States for a month, I took the photos, performed [for the tour], traveled and saved money all at once,” he said.

Apart from being one of the most well-established and popular ballad singers in the country, Im is also known as a guy who will give you a good laugh in the humorous ways he handles his online fans and even internet trolls. Even regarding recent rumors surrounding the head of his former agency - who allegedly took money from smaller concert organizers promising them a concert from Im, but did not keep his word - Im posted on Instagram, “All I did was sing the best I could. I want to know who’s telling the truth as well. I hope you figure it out!”

But his humor isn’t always him being silly. Every word of it comes as the result of his conscious endeavor to make sure that he does his job well, a secret that helped him keep his place as one of the most popular singers over three decades.

“Celebrities are humans,” he said. “We have things that upset us. We could have had fights with our parents, but we still have to smile in front of everyone, because that’s our job. So I try to smile, even when I’m alone and depressed. I tried to make that into a habit so that it comes out naturally. Some people even ask me if something good happened to me, and something good actually does happen because of everything. It’s my motto, and it’s something I tell everyone else. Smile!”

For those who would like to learn more about his way of life, the first track of the album, “All My Life,” is worth a good listen.

“The reason it’s in the first track is because every December, we have all these resolutions - that we’re going to change, we’re going to go on a diet and so on. We tell ourselves that we have to be happy, and that we have to try so hard to be happy. But in the end, what makes us smile is time. You will be smiling at some point, so why not start now. That’s the message that I want to send,” he said.