Ahn Hyun-ho, who also served as vice chairman of the Korea International Trade Association (KITA), will get a three-year term. 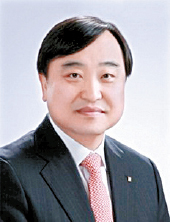