This isn’t just your average Mohave, this is the Master

This isn’t just your average Mohave, this is the Master 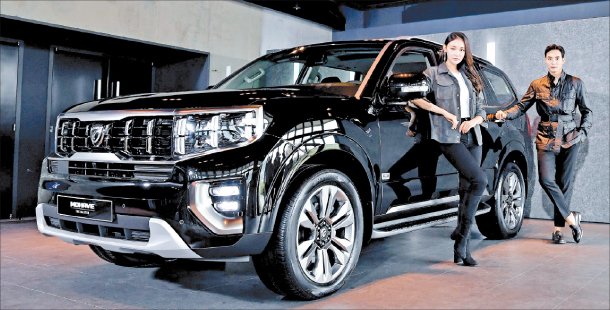 Models pose next to the Mohave the Master on Thursday in Incheon. [KIA MOTORS]

INCHEON - Kia Motors launched the new generation of its large-size Mohave SUV as it strives to lead the segment this year in a bid to recover falling sales figures.

The second-largest automaker by sales in Korea announced in a media event Thursday that it has officially launched the already well-received Mohave the Master, which took its design cues from Kia Motors’ concept car “Mohave the Masterpiece,” unveiled at the Seoul Motor Show in March.

The automaker said more than 7,000 vehicles have already been ordered since Kia opened preorders on Aug. 21.

The Mohave series has been one of the strongest players in boosting the automaker’s sales since it was first introduced in 2008 as a premium SUV.

“With the Mohave the Master, we aim to again lead the local SUV market for the latter half of this year,” said Kia Motors Vice President Kwon Hyuk-ho. “The new Mohave has completely changed from the previous generation and has exceptional on-the-road performance and the latest technological gadgets.”

The new SUV is 4.93 meters (16.18 feet) in length, 1.92 meters in width and 1.79 meters in height and can seat up to seven people, depending on options. With its V6 3.0-liter turbo diesel engine linked with an eight-speed automatic transmission, the car is rated at 260 horsepower and 57.1 kilogram-meters (413 pound-foot) in torque.

The improved rear-wheel suspension system can provide a more comfortable on-the-road experience for drivers as the upgraded feature can smooth out bumps and enhance traction while driving, the automaker added.

The SUV also comes with a 12.3-inch display infotainment system and a number of safety features including blind-spot collision prevention and driver attention warning.

The updated Mohave is expected to compete with Hyundai Motor’s Palisade and GM Korea’s Traverse in the domestic large-size SUV market. Kia Motors believes the Mohave the Master will help boost its sales numbers, which have fallen this year.

Between January and August, Kia Motors’ sales fell 1.9 percent to 1.81 million vehicles from 1.84 posted in the same period a year earlier. The automaker’s domestic sales nosedived 7.1 percent on year to 333,312 units during the same period.