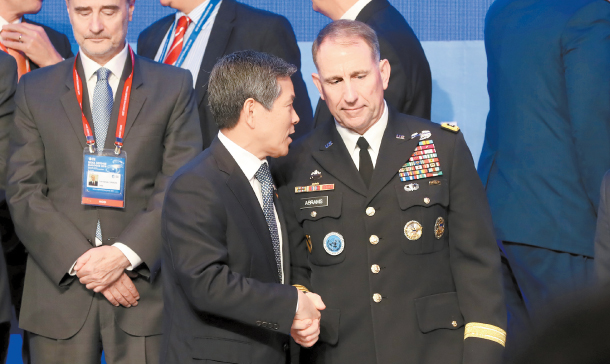 Korea’s defense chief on Thursday took an apparent jab at Japan at an annual international security forum in Seoul attended by hundreds of officials and experts.

In his keynote address for the Seoul Defense Dialogue (SDD) 2019, Minister of National Defense Jeong Kyeong-doo said there were “concerning movements around the Korean Peninsula” by one country that was “trying to maximize its interests by fomenting security clashes with a neighbor.”

Although he didn’t mention Japan by name, the remark is believed to reference Tokyo’s recent economic measures toward Korea - actions that Jeong said were part of an “intensifying competition” among regional powers to pursue agendas focused on narrow interests rather than mutual gain.

This year’s SDD, which kicked off on Wednesday and is set to continue until today, was the largest since the event first launched in 2012 as a vice ministerial-level forum to build security cooperation and foster dialogue in the Asia-Pacific region.

Hundreds of defense officials and experts from a total of 56 countries and five international organizations took part, including the commander of the U.S. Forces Korea (USFK), Gen. Robert Abrams, who attended the forum for the first time.

While he did not take questions, Abrams’ presence at the event appeared to be aimed at allaying concerns of a growing rift in the U.S.-Korea alliance as a result of Seoul’s decision to withdraw from a military intelligence-sharing agreement, known of the General Security of Military Information Agreement, or Gsomia, with Japan over differences in security perceptions.

Yet noted was the absence of U.S. ambassador to Korea Harry Harris, who skipped the forum to attend another security conference in the Maldives on Tuesday and Wednesday. After Korea’s Foreign Ministry requested that he refrain from making public comments on Gsomia on Aug. 28, Harris made his dissatisfaction with Seoul apparent by canceling all his public appearances in the country over the last week.

Unsurprisingly, the ongoing Korea-Japan row, which escalated from an initial dispute on historical issues to encompass economic and security dimensions over the last two months, stood as the highlight of Thursday’s session as former and current security officials from the two countries clashed in full view.

As an apparent response to Jeong’s speech, former Japanese Defense Minister Satoshi Morimoto said it was a “disappointing” development that the Korean government chose not to renew Gsomia amid a persistent threat from Pyongyang, adding Seoul wrongly linked the decision with Japan’s imposition of more stringent export controls of key industrial materials to Korea and its removal of Seoul from a list of preferred trade partners.

To this, Korean Vice Defense Minister Park Jae-min stressed that it was Japan that first cited security concerns with Korean export controls to justify its trade restrictions, saying that Seoul’s decision on Gsomia was reached with a determination that it was inappropriate to share sensitive military information with a country that did not trust it.

Park, however, appeared to leave open the door for a future settlement on the intelligence-sharing pact with Japan, saying it remained active until November and that the Korean government could “reconsider” scrapping the deal if Tokyo withdraws its trade restrictions on Korea.

For Seoul’s defense officials however, the SDD forum presented other lucrative opportunities to demonstrate the country’s stature as a major global arms manufacturer.

Among the number of minister-level talks that took place on the event’s sidelines, Jeong’s discussions with Indian Defense Minister Rajnath Singh stood out as particularly important for Seoul in light of India’s continued interest in buying Korean-made weapons to augment its massive military.

As the world’s second-largest arms importer, India in May selected to import Korean arms maker Hanwha’s K-30 Biho short-range self-propelled anti-aircraft systems in a $2.66 billion deal after a fierce bidding process with Russian competitors. This decision was protested by Russian Defense Minister Sergey Shoygu, who claimed the Indians did not properly test K-30 Biho in a deliberate attempt to sideline Moscow, its largest arms provider.

With Russia redoubling its efforts to get New Delhi to reevaluate its import decision and the budget issues in India preventing the purchase from going ahead, Jeong was expected to focus his attention on persuading Singh to push forward with the deal.