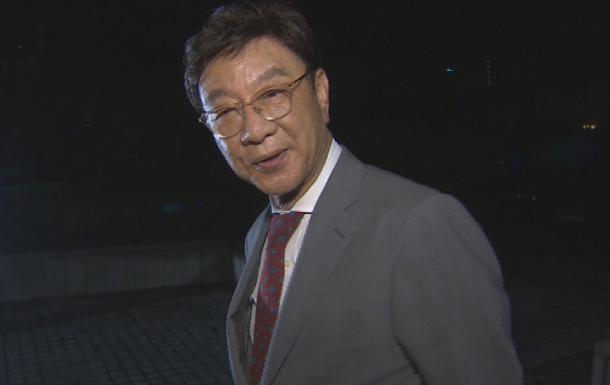 The president of Dongyang University said Thursday that the wife of controversial justice minister nominee Cho Kuk asked him to lie about an award that their daughter claimed in a medical school application, as prosecutors investigate whether it was fabricated.

Choi Sung-hae, president of Dongyang University, was questioned for hours on Wednesday by the Seoul Central District Prosecutors’ Office as a witness in a snowballing admissions fraud scandal surrounding the daughter of Cho, President Moon Jae-in’s nominee to head the Justice Ministry. The prosecutors are investigating a suspicion that Chung Kyung-sim, Cho’s wife and a professor of English at Dongyang University, forged an award that their daughter submitted as a part of her application to Pusan National University’s (PNU) medical school. The 28-year-old daughter entered the school in 2015.

Following the questioning, Choi told reporters early Thursday that Chung had asked him to lie about the award.

“I had several telephone talks with Professor Chung [after the suspicion was reported by the media],” Choi said as he left the prosecution around 1:30 a.m. on Thursday. “She asked me to say that I had authorized her to give an award.”

“I told her that I have no such recollection,” Choi said. “She, then, asked again if it was impossible for me to say so. I told her I cannot do that because I had never authorized her to give an award.”

The Language Education Center of Dongyang University issued an award for volunteer activity to Cho’s daughter in September 2012 when Chung was heading the institution. The daughter claimed the award as a presidential honor in her application to Pusan National University’s (PNU) medical school in 2014.

The lack of authenticity of the award is one of many allegations about Cho’s daughter’s academic career.

The JoongAng Ilbo published an exclusive report earlier this week challenging the award. “I have never approved or given such an award,” the report quoted Choi as saying on Tuesday.

Choi told reporters on Thursday that he decided to reveal the truth instead of accepting Chung’s request to lie because he chose to follow his conscience as an educator.

He said his memory is completely clear. “If I had given such an award, there is no way for me to not remember it,” he said.

According to Choi, the contentious award carried the university president’s seal but had a wrong serial number. “We always check the serial number before placing a seal,” he said. “That award was carrying my seal, although the number was wrong. I don’t know what had happened.”

More political controversy escalated Thursday after two heavyweights from the ruling Democratic Party (DP) admitted they contacted Choi before he went in for questioning. The DongA Ilbo reported earlier Thursday that two senior members of the ruling party pressured Choi to help simmer down the scandal, but the report did not cite their names.

Ryu Si-min, head of the Roh Moo-hyun Foundation, and Rep. Kim Du-kwan of the DP came forward Thursday and admitted they had contacted Choi but denied having exerted any pressure.

“I had a telephone talk with Choi on Wednesday,” Ryu said. “But I never asked him to help [Cho].”

“How can I ask a university president, a public figure, to lie to the media and the prosecution?” Ryu continued. “It is unimaginable.”

Ryu said he only contacted Choi to check the facts as a journalist who operates his own YouTube channel.

Rep. Kim also admitted Thursday that he had telephoned Choi on Wednesday. “Because there is misunderstanding about justice minister nominee Cho, I thought it was a legitimate thing for me to check on what had happened,” he said.

Kim said he and Choi have maintained a good relationship since 1990s. “We meet once or twice a year and have telephone conversations,” he said. “It is the job of a lawmaker to talk to people and learn about public sentiment.”

Kim also denied asking Choi to help Cho. “Choi said he does not remember giving the award, so I advised him that it is possible for other officials to have done so, and he needs to look into such a possibility,” Kim said.

Meanwhile, speculation grew in the legal community that Cho’s wife Chung will soon be summoned by the prosecution over the suspected forgery. They said a summons is imminent because the statute of limitation on a forgery charge will expire in two days.

The award was dated Sept. 7, 2012, and the seven-year statute of limitation will expire tomorrow.

Criminal law experts said if the award was indeed a fake and if it was used as a part of the admissions process for PNU medical school in 2014, other charges can also be applied. In that case, the prosecutors may have more time.

“If the forgery is proven, the prosecutors can indict Chung on charges of obstructing the PNU’s admissions operation and using a forged document,” said lawyer Lee Hyun-gon, a former judge. The statute of limitations for both charges is seven years.

A senior prosecutor said it is possible for the prosecution to indict Chung without questioning her. “When charges are solid, you can prosecute the suspect without an interrogation,” he said.

Embattled nominee Cho changed his words on Thursday, as more suspicions were revealed about his wife and daughter. “I am checking on the details,” he said Thursday. “I will tell everything tomorrow [at the National Assembly’s confirmation hearing].”

On Wednesday, Cho insisted that the award was legitimate. He said his daughter had taught English to middle and high school students at Dongyang University and received the award for it.

Cho refused Thursday to answer any questions asking about his wife’s involvement.

The National Assembly is scheduled to hold Cho’s confirmation hearing today. As of Thursday afternoon, the ruling and opposition parties agreed to call 11 witnesses. Dongyang University President Choi, however, wasn’t one due to the fierce opposition by the ruling party.

The main opposition Liberty Korea Party said it had to agree to exclude Choi because it feared the confirmation hearing may not take place at all.