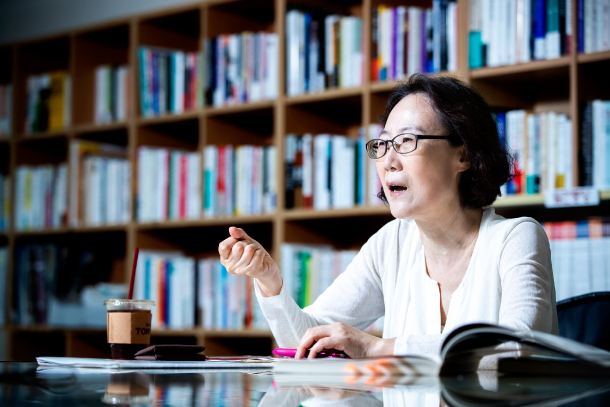 Jeong Hye-Gyeong, A leading researcher in Korea on the study of the forced mobilization by the Japanese during World War II [PARK JONG-KEUN]

The Korean Supreme Court’s rulings last year ordering Japanese companies to pay compensation to victims of forced labor continue to resonate after the issue took on a diplomatic dimension with Tokyo’s apparent economic retaliations against Korea based on the rulings.

During the Japanese colonial period (1910-45), about 299 Japanese companies subjected hundreds of thousands of Korean workers to forced labor. The companies include Toyota, Sumitomo Metal, Hitachi and Toshiba.

In July, Japan imposed tougher restrictions on the export of key industrial materials to Korea, followed by its removal of Seoul from its so-called white list of countries that receive preferential export treatment. In response to these trade restrictions, the Blue House decided last month to terminate a military intelligence-sharing deal, the General Security of Military Information Agreement (Gsomia), with Tokyo.

Jeong Hye-Gyeong, a leading researcher in Korea on the study of forced mobilization, strives to reveal the conditions that Korean children were forced to work in by the Japanese during World War II in her recently published book titled “The Children of Joseon Forced into the Asia-Pacific War.”

Until 2015, Jeong took on an investigative task at a government committee first established by the Roh Moo-hyun administration that investigated the impact on Koreans from Japan’s forced mobilization.

In an interview with the JoongAng Sunday last month, Jeong spoke about her experiences working for the commission and how she met about 3,000 victims and recorded their stories over the span of 11 years.

Jeong paid close attention to the work conditions of children, who were often mobilized to work in textile, munitions and construction factories, which were long neglected by earlier efforts to collect internal and external data about forced mobilization.

“What I found is only a small part of the reality,” said Jeong. “It is difficult to estimate the true scale of child-mobilization cases.”

Jeong also refuted a number of highly controversial claims put forward in a book titled “Anti-Japanese Tribalism” by Rhee Young-hoon, on the issues of forced labor and sex slavery during the Japanese colonial period. Claiming the information fed to Koreans by the media is untrue, Rhee’s book says only a small number of Korean women were forced to work as sex slaves and that the women were deceived by Korean sex traffickers or sold by their relatives. The book also claims that Japan does not have to compensate Korea because Korea’s right of claim was abrogated with the 1965 Korea-Japan normalization treaty.

Q. Is it true that the Japanese Empire forcibly mobilized children to work during the war?

A. Based on the data collected and analyzed by the committee, I have recorded the victims grouped by ages in Japan. Even Japanese scholars were shocked. At that time, industrial regulations in Japan prohibited the mobilization of children under 14. However, Korean children were forcibly mobilized in practice. The number [of children that were forcibly mobilized] I personally figured out is about 500. I assume the actual number is way more than that.

Some say that Japan violated international law at that time. What do you think about this?

By 1932, Japan already ratified the International Labour Organization (ILO) No. 29, the convention concerning forced or compulsory labor. The convention prohibited forced or compulsory labor for those under 18, but [Japan] violated the international treaty they ratified using wartime martial law. Forced mobilization of children is just one example that clearly shows Japan’s illegal behavior.

Where did the children usually work?

Some of the children, who were only five and six years old, were sent to Manchuria or the [Pacific] South Sea Islands. Also, some children who were sent with their families were not able to go to school but were mobilized and forced to build airfield runways. In addition, according to data from the Library of Congress, the de facto national library of United States, children who were sent to the sugar cane farms on the South Sea Islands had to work more than ten hours just like the adults. Lots of children were mobilized in the munitions factories where they had to cut and assemble parts for Zero-sen fighter jets, a symbol of Japanese military aggression. Children worked at many different places such as coal mines, construction sites and cotton mills, both on and outside of the Korean Peninsula.

The book “Anti-Japanese Tribalism” by Rhee Young-hoon has been at the center of some controversy. Some deny the mobilization was forced. What do you think about this?

In 1938, the Japanese Empire enacted the National Mobilization Law, which was a law to mobilize people, materials and funds not only from the Japanese mainland but also from occupied territories and colonies to take part in wars. It was a type of ‘Enabling Act’ with a penalty clause that could be used to punish people when they did not comply. The biggest fallacy [of prior studies into forced labor] was that the cases of those who voluntarily went to Japan for jobs were not distinguished from those who were forcibly mobilized.

Do you mean that the arguments in the “Anti-Japanese Tribalism” are wrong?

[Japanese people] deceived Korean children, saying that they can earn some money under favorable conditions or can go to school while earning money, to entice them over to Japan. Can we say that there was no force involved if Japan forcibly mobilized the children by deceiving them? Whose fault is that, the one who deceived or the one who was deceived?

Some Japanese people deny that the rights of the Korean forced laborers were abused by bringing up the cases of some Japanese who worked under similar conditions as Koreans. What do you think about this?

It is wrong to view Japanese and Korean people equally with only records related to two groups that worked together in a coal mining pit. The details of the work that Japanese people did were different with those Koreans did. While Japanese workers searched for mineral veins or were ordered to set off dynamite, Koreans worked at way harder work sites, digging or excavating rocks. Japanese workers were also paid more than Koreans. Japan did not treat the Korean people equally and did not allow them equal rights.

How many victims of forced mobilization did you meet?

The numbers of victims that I met was about 3,000. The saddest thing is that the victims could not distinguish where they were forcibly mobilized, whether it was Hokkaido or the South Sea Islands. Many of them did not even recognize the fact that they were victims.

How many cases of forced mobilization were there?

The reports number about 210,000. The total numbers of victims is about 1,800,000, including the 480,000 stated in the list of forced mobilization created during the Roh Tae-woo administration.

How many work sites were there?

In total, on the Korean Peninsula there were more than 8,000 work sites. The company house of Mitsubishi was located in Bupyeong in today’s Incheon. These work sites are where human rights abuses were committed against the forcibly mobilized people.

Local governments should investigate and preserve these work sites and make steady and persistent efforts to register them with Unesco. Japan said they completed the investigations on those work sites. However, Korea is not trying to study, investigate or preserve those forced mobilization work sites even though we are the country of the victims.

Some people say that South and North Korea need to work together regarding the forced mobilization issue. Do you agree with them?

Out of all 1,800,000 victims, 30 percent of them came from North Korea. It is necessary to share this kind of information with the North. There are lots of opportunities available with North Korea including making pilgrimages to the forced mobilization work sites in the North, which number around 3,400.

South Korea’s ongoing diplomatic conflict with Japan regarding the Supreme Court’s decision ordering Japanese companies to pay compensation to South Korean victims of forced mobilization is far from over. How should the government act regarding this issue?

First of all, the government should open the related data, which are in the National Archives of Korea, to the public so that academic circles and the general public can access them.

Also, the cross-checking work on the list of the victims of forced labor, which has been discontinued, should be resumed.

We need to try to recognize ourselves as the victims through the documents or images that the actual victims have left.

Only when we reveal the truth can we negotiate with Japan on the moral high ground.