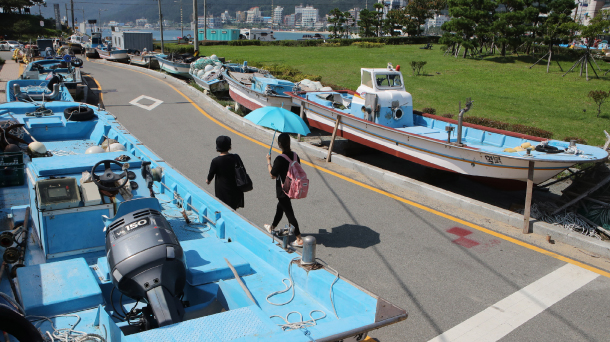 Small fishing boats are moved onto a roadside nearby Songjeong Beach in Busan on Thursday as Typhoon Lingling was forecast to land in Korea on Saturday. [SONG BONG-GEUN]

Typhoon Lingling, scheduled to land in Korea and pass near Seoul on Saturday, could be stronger than Typhoon Gonpas in 2010, which killed six people and uprooted 8,000 trees in Seoul alone.

Lingling, which formed in the sea southeast of Taiwan on Monday, had grown into a medium-sized typhoon by Thursday with a maximum wind speed of 39 meters per second (87.2 miles per hour), according to the Korea Meteorological Administration (KMA).

The typhoon, which approaches Jeju Island as early as this afternoon, is expected to land in Korea between 9 a.m. and 9 p.m. Saturday. Its maximum wind speed will be between 35 to 39 meters per second, which is nearly strong enough to lift a person.

Typhoon Gonpas, which landed in Incheon in September 2010 and was the last typhoon that passed close to Seoul and Gyeonggi, had a maximum wind speed of 20 meters per second when it passed near Seoul.

A total of 1.56 million households lost power at the time. Property damage due to the typhoon amounted to 176.1 billion won ($144.8 million), according to the Ministry of the Interior and Safety.

A total of six people died in the typhoon, and 11 others were injured.

The Interior Ministry hosted a meeting on Thursday to discuss emergency response strategies especially for farmlands, coastal areas and mountainous regions that may experience landslides.

“The typhoon is coming at a time when the ground is already weak after the past few days of heavy rain,” said Chin Young, minister of the interior and safety, during the meeting at the ministry headquarters in Sejong. “The strong winds from the typhoon may lead to heavy damages. Respective bureaus must check on the state of infrastructure and other safety measures before the typhoon hits us.”

A monsoonal front moving across Korea brought heavy rainfall in the past few days.

The ministry also issued a number of precautionary warnings for citizens including taping their windows.

“For those living in high-rise apartments or working in high-rise office buildings, we advise shutting the windows tight and taping [around the frames],” the ministry said in its website. “For farmers, we advise against going to check on fields during heavy rain.”

“Continue to check on TV, radio, Internet and smartphones the movement of the typhoon and when it may pass close to you.”

The KMA said it will rain some 100-200 millimeters (3.94-7.87 inches) in Jeju and southern and western coastal areas from Friday to Saturday and some 50-100 millimeters in the Seoul, Gyeonggi and Gangwon areas.

Festivals scheduled for the weekend were canceled.

A civic group in Paju, Gyeonggi, that organized a flower festival from Saturday to Sunday announced the cancellation of the event on Thursday.

The Gyeonggi provincial government also delayed a cultural and music festival near the military demarcation line from Saturday to Sept. 10. The Suwon Cultural Foundation also pushed back a jazz festival scheduled from Friday to Saturday, to Sept. 18 to 19.