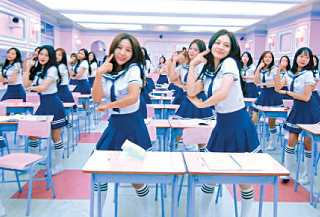 Producers of the cable channel Mnet’s audition program “Idol School” were sued for fraud by fans of the program on Friday.

A lawyer from MAST Law & Consulting representing the “Truth Commission for ‘Idol School’” announced that the group had sued the producers of the program under suspicions that they had destroyed evidence.

“If viewers of the program were aware of the fabrication of the votes from the start, then they would not have voted via text messages that cost money,” the law firm stated.

The firm added that the commission found circumstantial evidence of the Mnet channel ordering staff of the show to erase raw data as a police investigation into vote fabrications made by producers of Mnet’s audition program “Produce X 101” deepened.

Unlike “Produce,” “Idol School” was an audition program featuring individual trainees, so the fans will not be suing entertainment agencies, as the “Produce” fans are.

“Idol School” was an all-female audition program that aired in 2017 and featured 41 trainees. The show’s final members debuted as the girl group fromis_9.