LG improves on its dual-screen concept with V50S ThinQ

LG improves on its dual-screen concept with V50S ThinQ 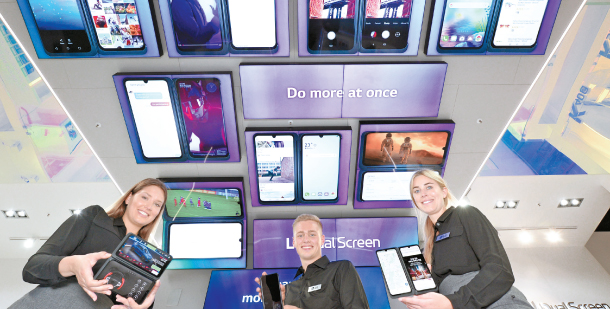 LG Electronics showcased its second dual-screen smartphone at IFA 2019 on Friday in Berlin.

The new device is LG’s biggest smartphone release of the year’s second half. In Korea, it will release under the name LG V50S ThinQ as a 5G phone. Overseas, the same model will be called LG G8X ThinQ and will work on 4G. The different names follows LG’s smartphone strategy to use the letter V to signify 5G phones, while G denotes a 4G device.

Like the V50 ThinQ released in May, the V50S ThinQ comes with a screen accessory that can be combined with the phone to give it two screens.

What’s new with the V50S is that it uses a free-stop hinge, meaning it can be fixed at any point between 0 and 360 degrees like a notebook. The previous version could only stop at 0, 104 and 180 degrees. 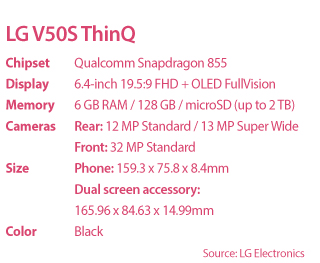 As expected, the upgraded second screen also has a small, rectangular 2.1-inch screen on the outside that shows the time, date, remaining battery and notices for messages and calls. This means that if a user wants to carry the phone with the second screen attached and closed, they will still be able to see some basic information on the exterior of the folded device.

The second screen is identical in size to the actual phone, unlike the V50 ThinQ version, which had a smaller screen. An identical second screen is to better ensure continuity in using both displays for one app - another function that was not possible on the V50.

“From the customer’s perspective, I imagine [the V50S] being a more practical and approachable phone than foldables (…) As a 5G phone, it has a competitive edge because it’s focused on user convenience and multitasking,” said Yoon Dong-han, LG’s vice president in the mobile communication product planning division, during a press conference at the trade show on Thursday.

Samsung Electronics’ Galaxy Fold was also available for the public to try out at IFA 2019.

In February, LG’s V50 dual-screen phone was announced alongside Samsung’s Galaxy Fold and China’s Huawei Mate X, both of which have folding screens. Although the Fold and Mate X appeared to offer a more impressive product, only LG actually managed to get its phone to market in the last seven months as the other two were plagued by technical problems.

The LG V50 ThinQ, released in May, has sold more than 500,000 units so far - a big achievement for LG, whose phone business has been largely failing in the past few years.

The V50S has features that can cater to video content providers. For selfies and vlogs, the phone has a 32-megapizel front-facing camera. For audio, it has an ASMR recording function. There’s also a mode where the second screen can be used as lighting while filming.

For the first time, the dual-screen accessory will be released in the United States. According to local reports, the LG V50S will not be much more expensive than the V50, which costs 1.2 million won ($1,000), and may include the accessory as part of the package rather than as a separate add-on. This is half the price of the Galaxy Fold, at 2.39 million won.

For the previous V50 ThinQ, the second screen was separately released with an official price tag of 219,000 won in Korea but is currently being given out for free as a promotion until late September.

An LG spokesman said that the price tag and whether the frame will be included in the package were undecided.

The LG V50 ThinQ is scheduled to be released in Korea next month.