Seoul National University students stage a candlelight vigil at the university on Aug. 28 to call for Cho Kuk to withdraw his nomination as justice minister. [YONHAP]

For the second time in three years, Seoul National University students are taking to the streets.

A candlelight protest was held Aug. 28 to show disapproval of the nomination of Cho Kuk as justice minister.

The protest, dubbed “STOP! Another Cho Kuk Professor Scandal,” was attended by approximately 800 students, according to the student council, which organized it. An earlier protest was organized by students individually.

As the first protest to officially call for Cho to abandon his nomination, the event attracted around 100 reporters and cameramen, including YouTubers.

Students candidly disparaged Cho’s qualifications, expressed disappointment with the so-called 386 generation that he represents and admitted exasperation and a sense of helplessness.

According to Doh Jung-geun, SNU’s 23-year-old student council president, Cho is a paradox: a legal expert and outspoken intellectual who calls for equality, yet who stands accused of bending many rules to get rich and help his daughter get ahead. For such a man to become justice minister is “a complete betrayal of equality and justice,” Doh said.

Currently, the student council of SNU is seen as being non-activist, rarely getting involved in politics. But the protest brings it into the political realm — and against the liberal government in power. Even student council leader Doh came under fire for participating in a debate held by the center-right Bareun Party in 2017.

The students’ call for Cho to abandon his nomination was particularly controversial. In the middle of the controversy, Lim Ji-hyeon, the student leader of the College of Engineering of SNU said, “I voted yes at the steering committee. This issue is gaining support regardless of one’s political inclination.”

At the SNU protest, dozens of conservative YouTubers broadcast the event live. Some political bigwigs attended too along with dozens of elderly people waving the Taegukgi (the Korean national flag) — giving a very conservative feel to the event.

After the protest, YouTubers asked Doh for an interview, but the student union leader declined. “I only conduct interviews with certified media to avoid any unnecessary misunderstandings,” said Doh.

The JoongAng Ilbo spoke to Doh about the controversy surrounding Cho Kuk and his daughter on Sept. 28. Below are edited excerpts of the interview. 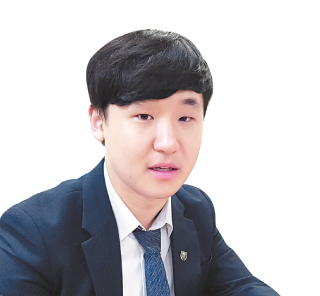 Q. Why are the students angry?

A. It has to do with [Cho’s] sense of ethics in terms of equality. Cho’s daughter was listed as the primary author of a thesis, and she won a scholarship. Had it not been for Cho’s intervention, this can only be explained by significant contribution from Cho’s daughter or the professor’s generosity, both of which are difficult to accept.

It must have been difficult to make a decision to hold a candlelight protest to call for Cho’s resignation.

Throughout my five years in university, this is the second time I have witnessed students standing up voluntarily. The first time was when former President Park Geun-hye’s close confidante Choi Soon-sil’s tablet PC was [discovered and its contents] disclosed. While absolute evil existed in the 1980s, students now pursue different values. However, we feel the same way about equality and a just society. Once again, we are expressing ourselves at this juncture.

We made the decision on whether we should call for a resignation or an explanation from Cho based on majority rule. As Cho had enough chances to explain himself and as the revealed facts are enough to enrage the students, we believed calling for his resignation was appropriate.

How did your high school thesis become an issue?

I have an uncommon name, so it’s rare to come across anyone with the same name. If you type my name on the internet, all the results will come up. Right now, some are criticizing me by “framing” me [ideologically]. They are passing off this issue as a matter of ideology, of left and right. I have nothing to hide, so I can take it, but attacking my girlfriend on SNS or causing damage to people around me is quite problematic. I apologize for my friends and teacher who wrote the thesis with me.

Don’t you think Cho’s daughter could feel the same way as you right now?

On a personal level, she might. However, the seriousness of the issue is far beyond the level that students can stomach. However, public criticism and personal matters should be separate. That’s how I’m dealing with this issue.

Some see the call for the resignation of nominee Cho as a rebuttal of President Moon Jae-in.

There is a clear distinction. We are not sending a message that extends to government policy. From positive to negative, students’ evaluations of the government vary. The common ground is around the nominee. We are trying to concentrate on that common ground, not stepping over the line or obscuring the issue.

Have you expressed opinions on anti-Japan issues or Jookchang-ga (the “Song of Bamboo Spears”) previously?

The student council neither received opinions nor discussed those issues. It is difficult to express opinions on issues outside the boundary of the school. As the nominee is a professor at SNU, and as students voiced their grave concerns over this issue, the school council has reflected the students’ voices.


There is a war going on in search engines to trend specific keywords. Do you approve?

Whichever side they are on, there are very few students who view real-time keyword ranking wars positively. Trying to trend a specific keyword is nothing more than a blind form of self-expression, and it isn’t anyway productive. It can be seen as an individual’s political activity, but not many people will look at the keyword and essentially believe, “oh, that’s what most people are thinking.”

How does this protest compare to the national candlelight protests in 2016?

In the second semester of my sophomore year, I was part of a student committee, so I participated [in protests] a lot. The level of seriousness is different, but [the two incidents] are in line with each other. There’s a sense of urgency that values such as justice, fairness and equality are breaking down.

The name “Chung Yoo-ra” is trending as we speak, who is daughter of Choi Soon-sil, the controversial friend of former president Park Geun-hye. She also was accused of academic irregularities.

The case of Chung Yoo-ra involved apparent irregularities in her admission to Ewha Womans University. But the Cho Kuk case is not about admissions irregularities but about how on earth a student still learning and researching could possibly have her name listed as a primary author of a thesis.

The candidate is denying his use of influence by saying he has been an “uncaring father.”

He might have been. But the overwhelming opinion is that, that is difficult to believe. Whether Cho got directly involved and did his daughter a favor makes no difference to many students. He touched on an issue of bequeathing social status and inequality. People are angry about that.

One day after the protest, Rhyu Si-min, chairman of the Roh Moo-hyun Foundation, criticized the candlelight protest by implying the main opposition Liberty Korea Party may have influenced the students to take up arms against Cho.

That’s because he wasn’t there at the protest. It’s disappointing for a man of his position to distort students’ voices for political reasons.