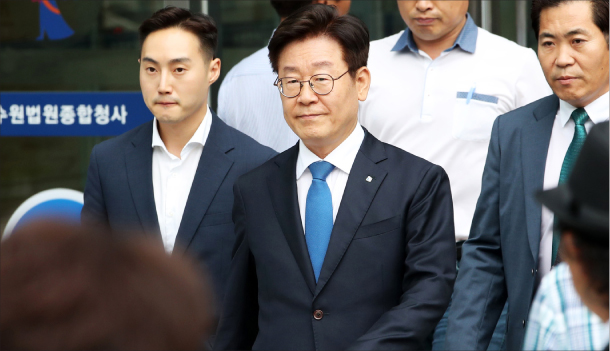 Gyeonggi Gov. Lee Jae-myung exits the Suwon High Court in Gyeonggi on Friday after the court ruled him guilty of violating the national election law by making a false claim leading up to local elections last June, overturning a lower court’s decision in May that cleared Lee of all charges. [YOHAP]

An appeals court convicted Gyeonggi Gov. Lee Jae-myung of violating the election laws Friday, overturning an acquittal in May.

The Suwon High Court ruled that Lee violated the national election law by making a false claim in the campaign leading up to local elections last June and fined him 3 million won ($2,510).

“Lee made a false claim by denying that he tried to put his brother in a psychiatric institution against his will,” the court said in its statement.

The high court’s ruling threatens Lee’s position as governor because the election of a public official found guilty of violating election laws and fined more than 1 million won becomes invalidated, according to the Public Official Election Act.

The Supreme Court will make the final ruling.

Lee, who previously served as mayor of Seongnam, was elected governor of Gyeonggi in June 2018. He was indicted in December.

Prosecutors accused Lee of three additional charges, namely, denying in a televised debate ahead of local elections that he falsely impersonated a prosecutor, though he was eventually fined for this in 2004; exaggerating the profitability of a development project as Seongnam mayor in 2010; and abusing his official power to put his brother in a psychiatric institution against his will.

In May, the Seongnam branch of the Suwon District Court cleared Lee on the four charges.

The Suwon High Court, while overturning the lower court’s decision about Lee’s false campaign claim about his brother, cleared Governor Lee of the three other charges on Friday.

“We found that Lee had an adequate reason to forcibly institutionalize his older brother at the time,” the high court said.

“Therefore we ruled that Lee’s actions were not part of an attempt to abuse his power.”