Architecture and urbanism biennale is all over Seoul

Architecture and urbanism biennale is all over Seoul 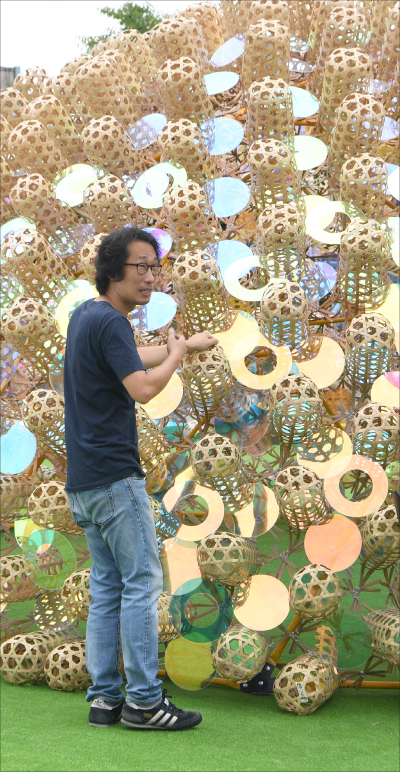 A visitor to the Sewoon Arcade, one of the venues for the Seoul Biennale of Architecture and Urbanism 2019 being held in central Seoul from today to Nov. 10, examines a work on Thursday. [NEWS1]

The Seoul Biennale of Architecture and Urbanism launches today at five different locations in the center of the city: Dongdaemun Design Plaza (DDP), Donuimun Museum Village, Seoul Hall of Urbanism and Architecture, Sewoon Arcade and Seoul Museum of History.

Hosted through Nov. 10, the biennale showcases examples of architectural projects around the world that promote cooperative living spaces in cities.

“The topic is called collective city,” said Francisco Sanin, co-director of the biennale and professor of architecture at Syracuse University, during a press tour of the exhibition at DDP on Thursday. “Each participant in the exhibition is answering questions about what they think about the nature of a city as a collective space - how do we live together, how do we grow culture and how do we improve our lives together.”

Each of the five venues have very different exhibitions.

DDP is hosting the “Thematic Exhibition,” which involves documentaries, architectural models, photos and research documents that shed light on architects’ ideas and definitions of collective space.

They include architectural collective Decolonizing Architecture Art Residency’s re-interpretation of refugee camps as a collective space beyond the narrative of suffering and displacement; Mexican architect group El Cielo’s analysis of how a political agenda and public housing policies in Mexico shaped urban environments; and Finnish Y-Foundation’s experiments on public housing programs including providing rental homes to homeless people.

The Donuimun Museum Village is hosting the “Cities Exhibition” that introduces some 80 cities’ development projects, which attempt to solve issues such as environmental degradation and limited living spaces.

“As you walk through the exhibition, which is fragmented across various locations within the Donuimun Museum Village, you may be able to draw connections between different cities’ examples and the dialogues taking place among them,” said Yim Dong-woo, curator of the exhibition and principal architect at the architectural design company PRAUD. “You will notice that we have a lot of examples from cities in Latin America, Africa and Southeast Asia. The biennale this year is going to be a platform for designers and cities of the Global South.”

The Sewoon Arcade is hosting “Global Studio,” which showcases research projects by groups of students from 40 universities around the world, including a group from Columbia University that examines how political and economic turmoil have shaped architectural styles through the ages, including post-World War II.

The Seoul Museum of History is hosting “Live Projects,” which showcases local citizens’ understanding of marketplaces and their role in influencing the urban landscape in Seoul.

The Seoul Hall of Urbanism and Architecture is hosting an exhibition called “Seoul Madang,” which introduces the most popular public spaces in Seoul as selected by Seoulites and 25 district offices’ choice of must-see collective spaces in their districts, on the third basement level.

The Seoul City Government is also hosting a separate exhibition on the history of the development of hanok (traditional Korean houses) in Seoul in the second basement level from today to Nov. 10.

A number of embassies are hosting lectures. The Embassy of the Netherlands in Korea hosted a panel discussion Friday at DDP, and the embassies of France and Germany held panel talks with architects on Thursday at the Seoul Hall of Urbanism and Architecture. A talk hosted by the Italian Embassy will be held at the hall from 3 p.m. to 5 p.m. on Sunday.