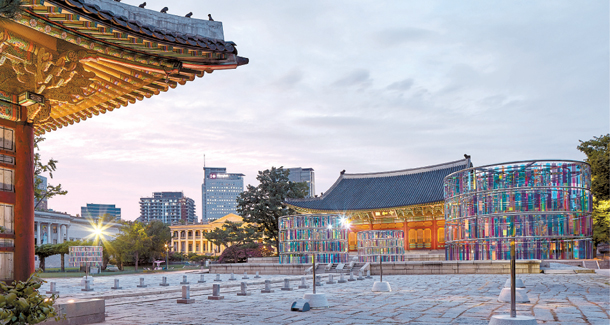 The “Daehan Yeonhyang” installations by architecture office OBBA stand in front of the Junghwa Hall inside Deoksu Palace. [MMCA]

Many tourists to Seoul say that what they most enjoy about the city is the coexistence of the past and present, where centuries-old palaces sit peacefully next to newly-built skyscrapers. And while that harmony is readily seen among buildings that sit next to one another, an art project currently being held at Deoksu Palace, central Seoul, takes place on an even smaller scale: the artworks sit in between the gardens and doorways of the royal palace.

The latest Deoksugung Project, co-organized by the Museum of Modern and Contemporary Art (MMCA) and the Korea Deoksugung Palace Management Office of the Cultural Heritage Administration (CHA), opened on Thursday and will run through April 5, 2020. The outdoor art exhibition features five works by five architecture teams, is the third version of the Deoksugung Project and is the first since the MMCA and CHA signed a memorandum of understanding to hold the project every two years beginning this year.

This year’s exhibition, titled “Architecture and Heritage: Unearthing Future,” features five architectural artworks by architecture teams Space Popular, CL3, OBBA, Bureau Spectacular and Obra Architects. Each team has taken on the challenge of reinterpreting the palace grounds to create their work under two main themes: opening up to the world and modernization.

“This exhibition is meant to take a look back at what Deoksu Palace signifies, as a place where modern history and the present coexist,” said curator Lee Ji-hoi. “Right here in this palace, King Gojong (1852-1919) proclaimed the will of the royal family to take a step forward for the Joseon Dynasty (1392-1910), to create new things based on the foundations of the old. This palace is where his efforts [were] to turn the capital city into a modern one, and in the process, we imagined the king as being a innovator, a designer for a new city.”

The exhibition is a way to “realize Gojong’s dreams,” according to curator Lee, and also a chance for the palace and MMCA to look back at its role as a public art facility in the city.

A digital screenwork titled “Gate of Bright Lights,” above, by architecture team Space Popular stands in between the pillars of the Gwangmyeong Gate. Six works titled “Furniture for an Emperor in Transition” by CL3 sit in front of the Hamnyeong Hall, right. [MMCA]

There are four works inside the palace and one in MMCA Seoul’s yard. The palace works begin with Space Popular’s “Gate of Bright Lights,” a digital video piece that allows viewers to feel as if the digital screen opens up yet another set of gates inside the Gwangmyeong Gate. Through the moving images of the video that utilizes various images of Korean tradition, it questions the role of architecture and art.

“While architecture used to symbolize authority and power in modern history, times have changed, democracy is the norm and media is a part of people’s everyday lives,” explained Lee. “So by putting a digital screen with images of the modern world, we suggest a new meaning of the palace, connected to the digital world through a new platform.”

Other works also take the old image of the palace and turn it into a new meaning, such as CL3’s furniture installations titled “Furniture for an Emperor in Transition” where viewers can imagine the chaotic transition during the early 20th century. Through “Daehan Yeonhyang,” colorful installations by OBBA, visitors can feel the jovial mood that the denizens of Joseon would have felt at royal events, while Bureau Spectacular’s “Future Archaeologist” allows visitors a chance to imagine how the cityscape will be different for future generations.

Obra Architects’ installation, titled “Perpetual Spring,” talks about humanity and its responsibility to maintain the environment.

“We chose to use both the palace and the MMCA grounds this year to expand the meaning of the two places. The connection between the places and the pieces are important, and citizens will be able to understand the importance of having a major outdoor space in the middle of Seoul,” said Lee.