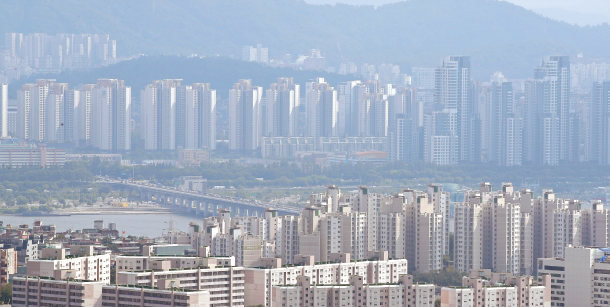 A bird’s eye view of apartment complexes in Seoul on Aug. 22. [YONHAP]

Property investors are dumping assets on the expectation that prices are set to decline, and so-called gap investors are also selling.

“Many are selling their real estate, except for few key properties, in order to manage risk,” said Han Moon-do, Yonsei University professor of real estate finance. “They think the housing prices have peaked.”

Gap investing is possible when the purchase price and the jeonse price, or long-term deposit rent, are about the same. This allows the investor to purchase the apartment with little investment.

But gap investment can become a major problem.

If an apartment price plunges below jeonse deposit, the investor will be unable to pay back the full deposit to the tenant let alone retrieve his initial investment.

Gap investments started to become popular in 2013 and increased rapidly in 2015. The recent trend of gap investors selling off their properties suggests that the real estate market is becoming challenged and investors are unwinding their positions.

A man in his 40s, who requested anonymity, became a celebrity in the real estate market after buying 100 apartments throughout the country four years ago through gap investment.

But that person only spent 5 million won in buying the apartments.

He recently got rid of most of the property.

“Except for a handful around the greater Seoul area, I have sold most of my apartments in the last couple of years,” he told the JoongAng Ilbo.

It is believed that he still owns two to five units.

He said he recently purchased a three-story building in Daejeon from the profit he made from selling those apartments and currently rents it out to a famous franchise restaurant.

There are already growing concerns about the market cooling, especially with the Moon Jae-in administration clamping down on housing prices.

The recent weakening of the economy is also seen putting downward pressure on the market.

Seon Dae-in, head of SDI Nomics, has been warning since May that the housing market will not stabilize until the end of the year.

Some argue that the gap investors have recently been selling off their properties as they have already reached their targeted profit. Additionally, the increasing burdens, including the rising comprehensive tax, are forcing some to sell off their properties.

The Moon government has been increasing the burden on owning multiple homes through heavier taxes as the government sees investors owning a large number of apartments as one of the key reasons behind the rising apartment prices, which is making it difficult for average Koreans to buy their own homes.

Some say that the recent government policy in capping the preconstruction sales prices would actually boost apartment prices, especially with reconstruction projects being delayed, limiting the supply of additional housing units

“Until the end of this year, housing prices in Seoul will go up,” said Lee Sang-woo, former Eugene Investment & Securities analyst and real estate expert, who started his own consulting firm. “The high concentration in Seoul, especially in areas with exceptional educational infrastructure [such as Gangnam], will get worse.”

The liquidity increase in the market, caused in part by low interest rates, and the increased government budget for land compensation, are also expected to boost housing prices.

Recently, the prices of apartments in high demand have gone up.

The market value of an 84.97-square-meter unit in the Raemian Daechi Palace in Daechi-dong, Gangnaam, southern Seoul, last month was at 26.8 million won. The same apartment saw its price fall 2.6 billion won in October last year to 25.3 million won in June.

The Korea Appraisal Board said offer prices are driving up the overall prices amid insufficient trading volume.

“One thing for sure is that housing prices follow the economy’s flow,” said Lee Hyun-seok, urban engineering professor at Konkuk University. “Instead of looking at only the real estate market, there’s a need to look at the economy in general.”