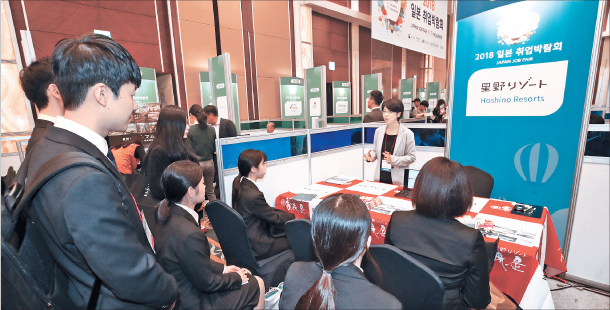 Kim Soo-yeon, 23, was relieved when she was hired by a Japanese company as her peers struggled to find employment. But now, she has a problem.

She had been planning some time off before beginning work next April. Now she’s worried after several reports claimed that the Japanese government may restrict work visas for Koreans as a part of the country’s broad economic retaliation.

She was going to apply for an employment visa after attending the company’s orientation next month. But if the Japanese government decides to restrict the visas, her efforts to find a job in Japan, which involved the sending of her resume to 30 Japanese companies, will all be for nothing.

“Although I’ve gotten accepted, I feel like I am standing on thin ice,” Kim said. She asked the reporter not to mention the name of the company that had offered her employment.

Paik Un-young, who was accepted by an IT company in Japan in July, shares the same concern. Paik nowadays spends a lot of time searching news related to work visas in Japan.

Although Paik was relieved to hear from the company’s human resources department that there is no change to his status, he still is concerned over the work visa.

“There are rumors circulating that the issuance of a work visa is taking more time than in the past,” Paik said.

Kim and Paik were lucky in a way, as they got accepted while there were a large number of young people immersed in studying Japanese and IT in hopes of landing jobs at Japanese companies, but they now face growing uncertainties as a result of the deteriorating relationship between the two countries.

Kentaro Hayashi, a consultant at Workport Korea, a company that specializes in introducing young workers particularly in the IT sector to Japanese companies, said recently the mood has changed.

“Honestly, there was a huge influence,” Hayashi said of the growing conflict between the two countries. “Just a year ago, the Japanese companies responded positively when asked to participate in job fairs held in Korea. But today, they are mostly negative.”

He said the Japanese companies ask why they should spend on job fairs in Korea at a time like this.

“While companies that previously had hired young Koreans expressed their intention to continue to participate thanks to a high level of satisfaction, right now it has become hard to find companies recruiting new employees,” Hayashi said.

Before the escalating tensions between the two countries, many Japanese companies were actively hiring Korean employees. Hayashi’s job search company, which opened its Korean office in 2016, has 8,000 companies in Japan as clients.

“In hiring one IT engineer, roughly 20 or so companies compete,” Hayashi said in explaining the high demand for people with IT expertise.

“It’s not only IT companies, but in all businesses areas, as they need IT talents. And as such, those positions can’t be filled only with Japanese.”

“Even in the IT industry, which requires expert knowledge, the most important factor is communication,” Hayashi said.

“While a wide variety of people apply - from India, Vietnam and China - Koreans overwhelm in language abilities.

“Not only is the grammatical structure of the two languages similar, the Koreans are exceptionally fast in learning the pronunciation,” he added.

Since 2010, Koreans being recruited by Japanese companies have been growing rapidly.

According to the Human Resources Development Service of Korea, over the last five years, 5,328 Koreans were employed in Japan. That’s 26.3 percent of all Koreans hired overseas.

The number of Koreans being hired in Japan has been growing around 20 percent every year.

“When excluding some exceptional cases, most of [the] quality jobs [overseas] for [Koreans] that graduate from local colleges are in Japan,” said an official at the Korea International Trade Association whose job is to help people find jobs overseas.

Opportunities are on the decline, particularly as Japanese companies have recently become passive in hiring young Korean workers.

The increase in hiring in Japan of young Koreans could be seen as contributing to the easing the job crisis that young workers have faced in Korea.

But that window of opportunity is being closed with the government cancelling job fairs connected to Japanese companies.

The Korean Ministry of Employment and Labor along with the Korea Trade-Investment Promotion Agency and the Human Resources Development Service were planning to hold a Japan-Asean job fair later this month. Among the 120 companies that were planning to participate, 90 were Japanese companies.

Many young Koreans hoping to find quality jobs were waiting for the moment, as the hiring process, including interviews, was to be held during the job fair, which allows them to try out without having to travel.

Lim Seo-jeong, labor vice minister, on Aug. 30 at a National Assembly hearing said the government has cancelled or excluded Japan from its job fairs because the job seekers were burdened by having to appear in a public space associated with Japan when tensions are so high.

Some online postings by job seekers accused the government of stripping them off their opportunities.

“The government is trying to create even a single job through its 54 trillion won [$45 billion] supplementary budget,” one post claimed.

“But my blood boils when looking at the government limiting the opportunities of job seekers due to the worsened relationship between the two countries.”

Some claimed that because of the job fair cancellation, now they will have to spend huge amounts of money as they would have to fly to Japan and stay there for three to six months in search of jobs on their own.

“My parent’s back will be broken [from the financial burden],” one post said.

“If the circumstances get worse, I would be forced to give up on getting a job in Japan.”

Cho proposed the idea where Koreans who finish their junior years in Korean colleges end their senior years in Japanese schools, and after graduation, they get hired in Japan.

But today the situation has completely turned.

Japanese Prime Minister Shinzo Abe in regards to the Korean government cancelling the job fair said Koreans would be harmed.

A young Korean recently accepted at a Japanese company raised concerns over other Koreans who consider him a traitor.

“I’m just going to Japan to work,” the young Korean, who requested anonymity, said. “But it’s really concerning being labeled as pro-Japanese or a traitor.”

The young Korean said he may quit his job.