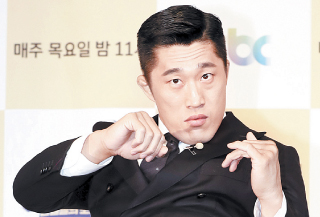 Martial artist Kim Dong-hyun, a regular on local television shows including “Laws of the Jungle” and “DoReMi Market,” has become a father after his wife delivered a son on Sunday.

Both the baby and mother are reportedly healthy. Kim married his girlfriend of over 10 years, Song Ha-yul, last September.

He posted a photo of himself holding the newborn on social media Sunday.

“A baby that will become a UFC Champion 20 years from now has just been born,” Kim wrote in a caption on the photo. “Let’s start wrestling when you turn three, baby.”