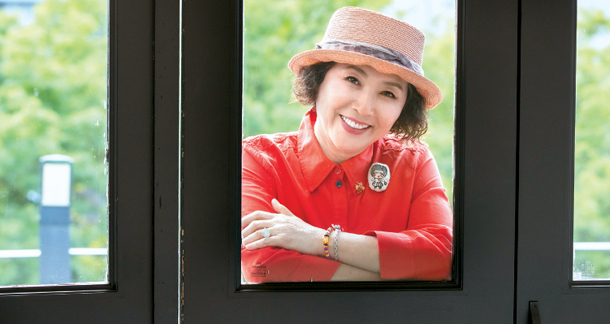 Veteran actress Go Doo-shim, 68, looked just like Hyeon-ok, the role of a caring mother she plays in the recent action-comedy film “Exit” as she began to talk about her fellow actors and how well they performed in the film.

“When Yong-nam [played by Cho Jung-seok] shot the scene in which he jumped off of the building, I couldn’t see him doing it, but he managed to do it.

“Didn’t he do well in the beginning scene with the pull-up bar? Yoona is as willowy as a cosmos flower but she ran so well,” said Go.

“Exit,” which tells the story of a loser named Yong-nam and his escape from a sudden breakout of poisonous gas, has surpassed 9 million ticket sales since its release on July 31 and has become the biggest hit of Go’s 47-year acting career.

For her 70th birthday party, Hyeon-ok and her family have a small gathering at a buffet restaurant located inside a skyscraper. When the party is nearing its end, the family is trapped inside the building due to the spread of poisonous chemicals, but Yong-nam, who is ignored by his family for being unemployed, helps them escape. 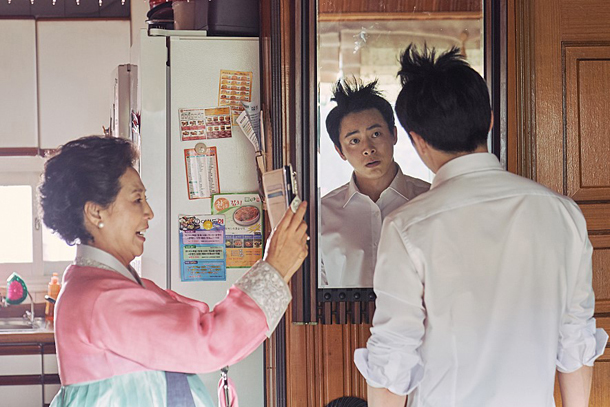 Go appears in only a couple of scenes, but her portrayal of a mother who feels worried, yet proud of her son adds much-needed emotion to the action comedy.

Go has appeared in more than 100 drama series and films and has played a mother in at least half of her works.

By portraying all types of mothers and some unconventional roles in between, such as a female president in “Good Morning President” (2009), and a shallow woman who falls in love with a man who is 20 years younger than her in “Family Ties” (2006), Go has swept all the grand prizes from the three major terrestrial TV networks. No other actor has received top prizes from all the three major TV networks.

Born and raised on Jeju Island, Go was an ordinary girl who majored in traditional Korean dance. But she came to land a job at a small trading company in Seoul and worked there for three to four years until she applied for an open audition organized by broadcast network MBC in 1972.

“My registration number [for the open audition] was 1,513rd and they only chose 42 but I was surprised to find out that I was chosen as No. 1 out of all the candidates. They told me that I wasn’t a beauty queen but I had a good face for acting.”

Go recently sat down with JoongAng Ilbo, an affiliate of the Korea JoongAng Daily, for an interview. The following are edited excerpts from the conversation.

Q. Where did you watch the film “Exit”?

A. I’ve been doing the so-called good films but those kinds of films do not make it big out in the market. I never expected that “Exit” would become this big. I saw the film at the press preview. The film made me so nervous so that I watched the film sitting on the edge of my seat. I think this is a perfect movie for families. I felt sorry for director Lee Sang-geun, who has been preparing for the film for eight years. He stayed up many nights on the set but the film turned out very well, making the best use of every minute.

I wanted to go easy [with big-name directors] but I have ended up working with newer directors. First of all, the script of “Exit” was very readable with no unnecessary parts. Director Lee seemed trustworthy, too. His face told me that he is a man of sincerity. I was also relieved to hear that Jung-seok would join the film [because I could ride on his popularity] (laughs).

In a scene in which you and Cho Jung-seok argue over the way he parts his hair, you two really look like mother and son.

I shot the scene comfortably because he and I are close in real life. He appeared in the drama series “You Are the Best!” as my son-in-law. He was so serious about his work and I liked his demeanor. I have been keeping an eye on him since then. He has been always the same and he is surely the one who lightens up the set.

Do you feel that portrayals of mothers on screen are changing as time goes by?

We can find devoted mothers at any time. I’m quite old-fashioned and I think I live with the mindset of my mother’s generation. I think I was influenced a lot by the “Diary of a Rural Village” too. That drama series still makes it hard for me to do some roles as an actor. But they are still part of me.

You will play another mother in the upcoming drama series “When the Camellia Blooms,” which will hit the air later this month and you will team up with Kong Hyo-jin and Kang Ha-neul. Do you have anything to say to younger actors?

You need to know how to discipline yourself. Try to filter out bad emotions and try to see and feel good things in your life. Popularity is like fog, clouds and wind. If you want to be loved for a long period of time, you try hard to be loved. Don’t hold hatred in your heart for long. How can you make eye contact and act if you hate someone? Also, when people don’t come to you, you should go to them first.