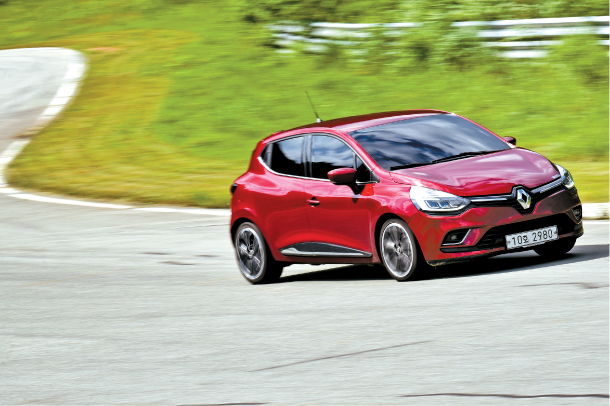 The automaker’s sales have dropped, production volume has fallen and its seemingly annual labor union dispute is due any day now. Exacerbating its problems - and certainly fueling tension with the union - the company said last month that it may have to lay off some workers as it struggles to make ends meet.

Sales tell the same story. Between January and August this year, Renault Samsung Motors sold 114,705 vehicles, down 39 percent from 157,313 during the same period a year earlier.

But it’s not all bad news. In August, the automaker sold 12,987 vehicles, up 2 percent from a year earlier. It may not be a big increase, but for Renault Samsung Motors, it symbolizes the end, at least for now, of its steady decline and even hints at the possibility that things might start getting better.

With that slight glimpse of greener pastures, Renault Samsung Motors is trying to jump-start its lackluster sales by once again promoting and offering discounts on its Clio hatchback. The automaker announced last week that it will provide discounts of up to 18 percent for those who buy the Clio this month.

It also offered a 1 million won ($839) discount for drivers paying for their new Clio in cash and last month offered an exclusive tablet style navigation system option for free with new purchases.

But those offers mean nothing if customers don’t know what they are buying. As a means to increase awareness of the Clio, Renault Samsung Motors invited reporters to test drive the hatchback on the road and on a track.

Late last month I drove the Clio to Taebaek Racing Park in Taebaek, Gangwon, where I spent about 4 hours in light rain trying out a range of Renault Samsung Motors vehicles.

After all that driving, it became clear that there was a reason that the Clio was one of the most popular cars in Europe, as the small hatchback contained a surprisingly explosive amount of power that I never expected after reading its specifications. The hatchback was the most sold small-size car in Europe for three consecutive years until 2018, and it more than proved why on the drive to Taebaek.

That said, earning the favor of one continent does not necessarily mean the car is going to dominate in another market. Renault Samsung Motors has, perhaps understandably considering its success in Europe, made very little effort to customize the Clio to the Korean market.

The compact hatchback’s exterior design resembles a rabbit without ears. The Clio’s short, succinct body looks as if the car is ready to jump right onto the road to please its driver. Soft lines across the sides make it clear that, like BMW Group’s Mini series, Renault Samsung is aiming for cute and cuddly, not sporty and sleek.

The Clio is 4.06 meters (13.3 feet) in length, 1.73 meters wide and 1.45 meters tall. The four-seater hatchback does have four doors, but it’s a lot more suitable as a two-seater vehicle. No matter how small or thin your passengers are, the backseats of the Clio are unlikely to be a comfortable experience.

The interior design was a little underwhelming. I already knew that the Clio is a small-size vehicle, so I didn’t have high expectations for the hatchback in terms of size. Yet the hard plastic-covered dashboard and run-of-the-mill seats do little to distract from the otherwise uncomfortably interior. Somewhat ironically, considering the exterior, the interior of the Clio is more functional sports car than fancy sedan.

But while my thoughts on the Clio’s exterior and interior are personal opinion, there can be little debate over how impressively it drives.

According to the specs, the Clio is rated at 90 horsepower and 22.4 kilogram-meters in torque - rather common numbers for small-size and even some mid-size vehicles.

Adding to the unimpressive figures, the route that I took the Clio on was rough and curvy. For that reason, the roads are filled with signs warning drivers to watch their speed on the difficult terrain.

Yet the little Clio and its 1.5-liter diesel engine were completely unfazed. The car hugged the road as it handled every turn without issue, picking up speed and cruising along far faster than recommended without any issue at all.

Even on the circuit after arriving in Taebaek, the Clio comfortably exerted its stable high-speed traveling capability and helped me enjoy every second on the race track.

Taebaek Racing Park, which had been abandoned for years due to drawn-out legal disputes until last year, has rough tracks with some cracks and splits, but the Clio almost made me forget that the surface was in dire need of repairs. Of course, the Clio is not a Porsche, so don’t set your hopes too high.

Even with such powerful performance, the Clio promises to be an economical option for prospective buyers, as it boasts almost unrivaled fuel economy at 17.7 kilometers per liter (41 miles per gallon).

And the model is more affordable than other foreign-made vehicles. Depending on trims and options, the Clio is priced between 19.9 million won and 23.2 million won.

The price level may be that low because Renault Group did not put much effort into upgrading the digital gadgets within the car. Even though it comes with a 7-inch display infotainment system, navigating through the unresponsive menu was not easy.

The navigation also lagged a little behind the vehicle in tracking its real-time movement, and the visuals were so old fashioned it affected the user experience. With its most sold small-size car in Europe, the Renault Group again proved my belief that foreign automakers are not that great in the digital sphere.

Considering the ongoing promotions, the Clio could be one of the best options in the domestic market for customers looking for an affordable foreign car that still does the job, assuming the job in question doesn’t involve any luxury or more than two people. 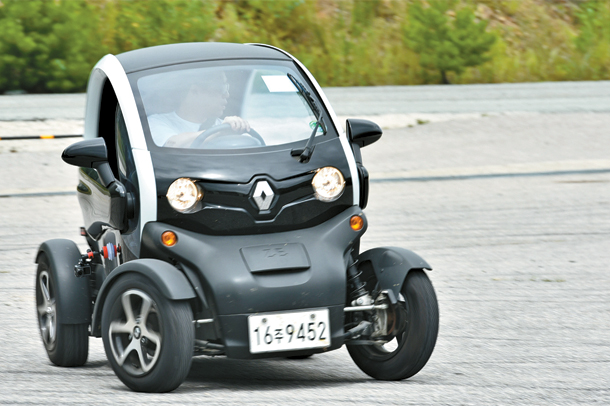 For the media event in August, Renault Samsung Motors also brought its tiny electric car Twizy and offered reporters a chance to take the miniature vehicle for a spin around a slalom course and race track.

There’s not much I can say about interior design because the Twizy barely has an interior. The black and white digital dashboard and plastic bucket seat are the extent of the interior design. Some models come with a second seat in the back, although logistically how you fit a second person in the Twizy was never made entirely clear.

The Twizy looks like the bizarre offspring of a go-kart and a real car, but the accessories definitely veer toward go-kart. There’s no air conditioner, no heater, no radio and nothing else you might find in a regular car.

Even getting in the car proved a challenge. The polycarbonate doors lack handles, and it took a while for me to work out that I have to detach the window from the body to gain access to the car.

That said, the Twizy is still a car. Speeding around the cones on the slalom course, the micro car held its own and proved that it was capable of performing like a regular car, although the lack of a premium suspension system or sound-proofed windows meant it was a loud, shaky ride.

Despite its boxy design, the Twizy didn’t struggle taking sharp corners or was difficult maneuvering, keeping all four wheels on the ground without any issue.

The same experience continued on the racing circuit, as the electric car had no problem whizzing around the course while maintaining speeds around 80 kilometers per hour. The Twizy, rated at 17.1 horsepower and 5.8 kilogram-meters in torque, delivered much more than I expected considering its size and basic design.

But it’s difficult to see what practical use there is for the Twizy. The car can’t drive fast enough to be legally driving on highways in Korea, and considering how small it is, any sort of accident is likely to be very dangerous for the driver.

The Twizy is also not exactly weather-proof. Drivers would need to dress accordingly in the rain or snow.

Even worse, it takes a total of three and a half hours to completely charge the battery. And even with a full battery, the Twizy can only travel around 55 kilometers. While this might be useful for some people needing a little run-around vehicle for city use, for most people, it’s likely to be extremely prohibitive. One good thing - the car can be charged with any 220-volt plug.

Renault Samsung Motors maintains the car travels more than far enough for its target market. The electric compact car is more geared toward local usage, and many fried chicken restaurants have already bought the Twizy for their delivery services.

The automaker says the Twizy should be thought of more as a secondary car, rather than a primary transport device, adding that the model is widely used on car-sharing platforms, city tour services and more in Europe.

Personally, I can’t see the Twizy being useful as much more than a toy for people with money to spare looking for a little fun. And if it is a little more than a toy, it’s an expensive one - the two trims are offered at 15 million won and 15.5 million won.

The small-size electric car does, however, seems like a practical, environmentally-friendly business-to-business option for government organizations and companies. As it can only travel at low speeds, the probability of being involved in an accident could also be low, and its small size can allow the Twizy to be parked almost anywhere.