Portraits that teach families how to smile

Portraits that teach families how to smile 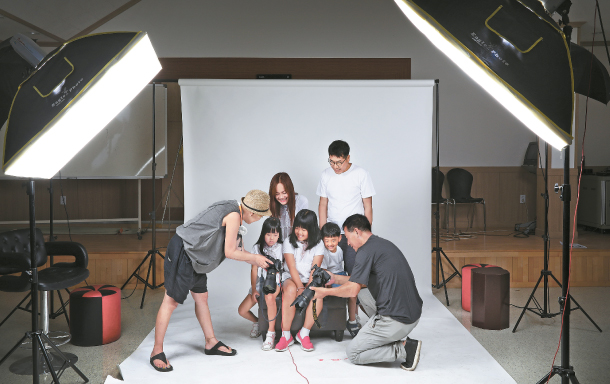 Sopaporn Phimkhor, back row left, flew from Thailand to Korea in 2008 to start a family with her Korean husband, Yun Kum-cheol, back row right. They now live with their three children, seated, in Sokcho, a coastal city in Gangwon where police officers try to help multiethnic households get along by offering free family portraits. [PARK SANG-MOON]

SOKCHO, Gangwon - Yun Kum-cheol’s family was the first to arrive, all wearing white T-shirts. It was free family portrait day, and Yun didn’t want to wait behind the other three families also taking part.

The family took their place in front of the camera: Yun, his Thai wife Sopaporn Phimkhor and three kids aged four, six and nine years old.

“Let’s have each child take a turn sitting on the mother’s lap,” a photographer suggested.

Not a good idea.

As soon as 4-year-old Ju-yeong conquered the spot, 6-year-old Sae-la frowned, refused to look up and slowly turned her back to the camera.

“Are you really going to act like this?” Phimkhor sternly asked. The child burst into tears.

“Okay, it’s over. No photos!” Phimkhor dragged the 6-year-old across the studio, making way for other waiting families.

“They’re only a year apart,” Yun sighed. “They fight over everything.”

On the sidelines, Hong Jeung-pyo and Nam Dong-woo, officers of the Sokcho Police Precinct, nodded sympathetically. As members of the precinct’s foreign affairs section, their job is to help bring peace to multiethnic families in the sparsely populated rural area - although their real purview is conflicts between foreign wives and Korean husbands, not squabbling siblings.

The family photo days are one of their proudest achievements. Twice a year, before the Chuseok harvest festival in September or October and in Korea’s “family month” of May - which includes Parents’ Day and Children’s Day - Nam compiles a list of about five families who have histories of domestic violence incidents or live in financially dire conditions. They are all invited to show their best side to the camera.

Something about the photos that end up on modest living room walls has brought a measure of peace to Sokcho.

“The program has grown so popular now,” said Hong, who is chief of the foreign affairs section. “They get really excited when they receive their framed photos. I don’t think the project will end until the photographers say so!”

When Hong first started running the foreign affairs section of the Sokcho Police Precinct in 2016, the precinct was getting two to three reports a month of domestic violence between multiethnic couples - mostly foreign wives from developing countries reporting physical abuse by their Korean husbands.

The precinct had jurisdiction over rural Sokcho and the nearby Yangyang County, which in total had about 330 multiethnic families. Most of the husbands are blue collar workers. The total population is only 11,000. 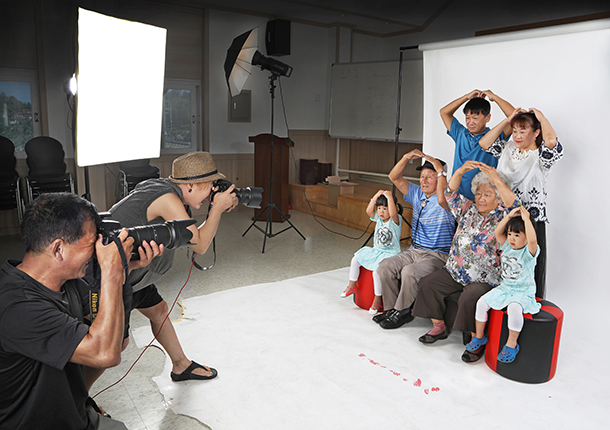 Members of the Sokcho branch of the Photo Artists Society of Korea, left, take shots of a multiethnic family with a mother from China and Korean grandparents. The group funds the free family portraits. [PARK SANG-MOON]

Hong and his three other colleagues in the section wondered if there was something the community could do to help the families get along. Nam suggested they offer free family portraits to multiethnic households who were economically unstable or had experience with physical abuse.

The Sokcho police reached out to the local branch of the Photo Artists Society of Korea, a nongovernmental group of photo enthusiasts, and the project took off in 2017.

The photos are taken on the top floor of a building owned by an organization of Sokcho taxi drivers. That organization’s secretary general, Choi Hee-jae, is also head of the Photo Artists Society branch. The top floor is actually a conference room for the taxi drivers, but since it’s barely used, Choi turns it into a studio for the family portrait shoot by setting up lights and other equipment.

The group subsidizes the whole effort.

Twice a year, Nam invites five families and sets a date, usually on a Saturday or Sunday. Choi and another member of the photographers’ group take the shots. They edit and print them and have them framed, a process that takes about five days.

Once the framed family photos are ready, Nam personally delivers them to the families, which he calls the best part of it all: watching their curious faces burst into joy.

“The families start off with low expectations, thinking the photo quality won’t be good because it’s free,” said Hong. “But when they receive the final product, they realize it’s way better than what they had imagined and they end up feeling satisfied.”

Since 2017, the program has been participated in by 21 families with members from a range of countries including Thailand, Vietnam, Cambodia, the Philippines, China and Russia.

Three years into the project, Hong said he’s coming across a new phenomenon: a shrinking number of cases of domestic violence in the region, which now has about 360 multiethnic families.

“We only get two to three cases of domestic violence from a multiethnic family in an entire year now,” said Hong.

“Over the past few years, our officers and officers from the women’s and juvenile affairs division ran a lot of programs trying to educate foreigners and their Korean husbands on ways to prevent violence,” he recalled.

“But I think the family photos definitely had a special impact. Families tend to see their framed photos in the living room and remind themselves of that happy moment when they got all dressed up for that special occasion.”

On Sept. 1, four multiethnic families gathered at the studio for this year’s second photo shoot, about two weeks ahead of Chuseok.

A fifth family - a Korean husband and Philippine wife - were supposed to join but dropped out two days in advance due to an “argument,” Nam explained.

“I tried to convince them to come, telling them now’s the chance to mend their rupture. But they kept refusing,” Nam said with a sigh. “They said they weren’t in the mood for a family photo.”

Ngo Thi La, 36, brought her 10-year-old daughter and 3-year-old son to get a portrait of their new family - minus the Korean husband she divorced two years ago. Ngo, who met her ex-husband through a matchmaking agency in Vietnam and currently lives in Sokcho with her two children, said she couldn’t get along with him or his mother.

“I couldn’t stand my Korean mother-in-law,” Ngo said in broken Korean, her tone rising as she described how and why she brought her marriage to an end. “She kept scolding me over and over again for no reason. It was just awful.”

Her plans for Chuseok: “I think I may spend some time out with the kids. Not sure where, but Sokcho has many beautiful places, so we probably won’t have to go too far.”

Yun and Phimkhor were invited because of their family’s low-income status.

“We don’t have Chuseok in Thailand,” Phimkor, 35, said. “But around this holiday time, I really miss my parents a lot. We video chat two or three times a week.”

Any plans for Chuseok?

“Of course cooking,” she replied without a moment of hesitance. “I like cooking for the family, but my husband has too many relatives.”

Li Shuxia, 38, from Harbin in northeast China, said she’s okay with the intense cooking because she used to work for a Korean restaurant back in her home country. She was introduced to her Korean husband in 2003 by the restaurant’s head chef. They now have two daughters, ages three and four.

Li, a masseuse, said she wants her kids to have the family portrait when they grow old. In the meantime, it will be hung in the living room for everyone to see.

Actually, the framed print for the living room wall is not the end of the story. Copies are available from the photographer - and are often requested.

“Every time they go back to their home country to visit,” Nam related, “they ask me for an extra photo of their family.”

It’s all part of a process of reassuring their parents and siblings, he said.

“They want to tell them they’re doing fine in Korea. That they’re living happily with their new family.”