Korea needs to pick up a win in Ashgabat

Korea needs to pick up a win in Ashgabat 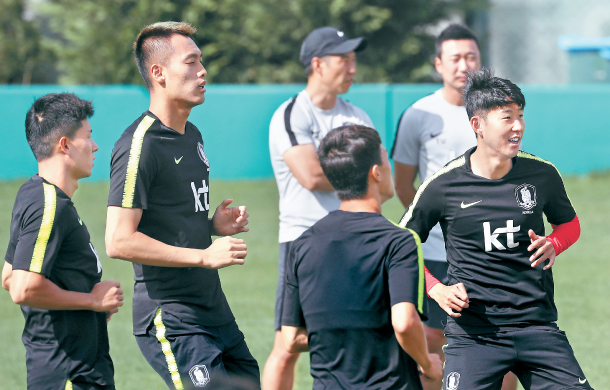 The Korean men’s football team will continue the long journey to the 2022 FIFA World Cup in Qatar today.

Hoping to advance to the World Cup for a 10th consecutive tournament, the 37th-ranked Korea will compete in their second Asian qualifying World Cup match against the 132nd-ranked Turkmenistan at Kopetdag Stadium in Ashgabat, Turkmenistan, starting today at 7 p.m., local time, or 11 p.m. in Korea.

Looking at the two teams’ world ranking, Korea should take away an easy win against Turkmenistan, but a recent performance raised concerns rather than expectations.

Ahead of the match against Turkmenistan, Korea played to a 2-2 draw against the 94th-ranked Georgia on Thursday. With head coach Paulo Bento’s experimental three-back formation, the Taeguk Warriors appeared to seriously trouble in defense and, although they didn’t lose, a draw was still a disappointment for a Korean team that should have comfortably cruised to victory.

While Korea had an unexpected result at the tune-up match, Turkmenistan is heading into the qualifying match off the back of a recent win, having just beat Sri Lanka 2-0 in a friendly match.

As Korea is well ahead in the FIFA ranking, the Taeguk Warriors are expected to pick up a win. Looking at the two teams’ all-time head-to-head record, Korea is slightly ahead at two wins and a loss.

They first played against each other during the 1998 Asian Games in Bangkok, when the two teams were assigned to the same group. Korea got off to a strong start by taking a 2-0 lead in the first half. However, they allowed a come-from-behind victory to Turkmenistan in the second half and lost 2-3. This was Korea’s first and last loss to Turkmenistan.

Again, the two teams met for the second time in February 2008, during the third round of the 2010 FIFA World Cup qualifying matches at Seoul World Cup Stadium. Korea easily redeemed themselves by winning 4-0.

Four months after, when Korea played an away match against Turkmenistan, the Taeguk Warriors once again won the match 3-1. In the last two matches, Korea scored seven goals while only conceding one. Interestingly, in all three of Korea’s matches against Turkmenistan, at least one Korean player has scored at least two goals.

At the Bangkok Asian Games, Korea may have lost, but Choi Yong-soo left quite an impression by scoring two goals. During the second match against Turkmenistan, Seol Ki-hyeon scored two goals while Kwak Tae-hwi and Park Ji-sung scored a goal each.

Then, in the third match, Kim Do-heon picked up a hat trick.

Following the trend, Korea is hoping to see a good number of goals. Hwang Ui-jo of Bordeaux is expected to be the Taeguk Warrior’s top striker. By scoring two goals during the friendly against Georgia, Hwang has now scored nine goals under Bento. Son Heung-min of Tottenham Hotspur, who is also the captain, is also another player looking to get on the scorecard, as he hasn’t managed to find the back of the net for three consecutive national team matches.