The pace of growth in fiscal spending is alarming. What should have been a source of concern and controversy has been buried by the political brouhaha over the nomination of justice minister nominee Cho Kuk and scandals involving his family. The fiscal plans are unprecedented in the 2020 budgetary outline and fiscal planning. It is normal for the government to become expansionary when the economy is bad. Still, it has gone too far.

The increased ceiling in the deficit leads to that much growth in national debt. Korea’s debt reached 681 trillion won and could hit 1,061 trillion won by 2023. Over just five years, the national debt will be ballooning by 380 trillion won. The government pays little attention to the National Finance Act that mandates fiscal planning and operations to prioritize efficiency and integrity in public finances.

At such a rate, the national debt would increase 9.3 percent on average over five years, far outpacing estimated economic growth of around 2 percent. Such deficit-financed expansion is unprecedented and has come too fast. Even the National Assembly Budget Office advised more caution in fiscal management.

The government and ruling party are unconcerned. They claim even with national debt exceeding 1,000 trillion won in 2023, the ratio against the gross domestic product (GDP) would be 46.4 percent, modest when compared to 222.5 percent in Japan, 116.4 percent in the U.K. and 106 percent in the U.S. But comparing us to those economies is ridiculous, according to economists. Countries like Australia, Switzerland, Sweden, New Zealand and Denmark, whose debt ratios against GDPs hover around 40 percent, all endeavor to reduce the share. 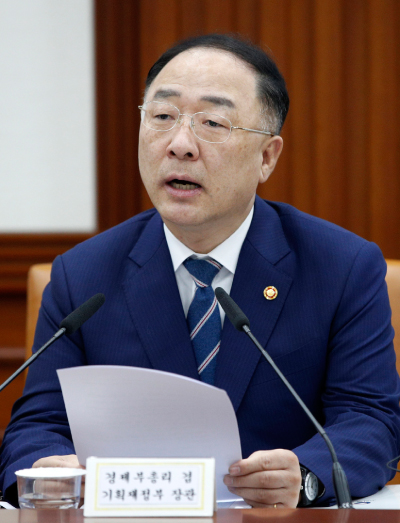 Deputy Prime Minister for Economy Hong Nam-gi presides over a meeting to discuss how to boost the economy in the Central Government Complex in Seoul on Sept. 4. [NEWS1]

There are many other reasons Korea should be more careful with its public finances. The country’s population is aging fast and its birth rate is now the lowest in the world. Plus the country must be prepared for unification. Then there are the near 600 trillion won in liabilities of public institutions that are not counted in the national debt account.

The private sector debt level poses a greater problem. Household debt is nearing 1,600 trillion won, and that is seventh highest among big economies in terms of the ratio to GDP, according to the Bank for International Settlements. When public finances turn bad, credit ratings for Korean banks will go down for sure.

That means that banks would have to raise funds at more expensive rates and pass along those extra costs in lending rates. Spikes in borrowing rates could be fatal to Korean households, especially those that have stagnant income. Koreans already spend half of their monthly earnings to pay back loans.

The situation for the corporate sector is no better. Corporate debt against GDP is now 102 percent, the 16th highest in the world. Some may think the ratio is permissible for the world’s 11th largest economy.

But more than a third of Korean companies did not earn enough to pay interest on their loans last year. They had to raise more debt to finance existing debt, increasing their liabilities. Restructuring may become inevitable, requiring huge tax funds.

Global ratings agency Fitch has advised Seoul to pay heed to its public finances. But the government and ruling party don’t care. According to its five-year outline, the deficit will increase even after next year with a supersized budget used to prop up the economy. The Ministry of Economy and Finance claims the government may have to keep up such expansion until 2023 as the economy won’t likely pick up on its own.

The government predicts the economy will return to a solid growth path after 2020 after its aggressive spending. There is only one explanation.

The ruling party has its eyes on the 2022 presidential election. Next year’s mid-term budgetary outline has been submitted to the National Assembly. The future of public finances must not hinge on political judgment.