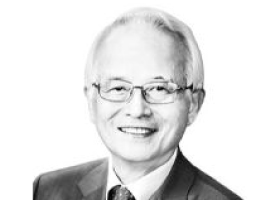 Kim Min-hwan
The author is a professor emeritus of journalism at Korea University.

In 2003, a generational change successfully took place in Korean politics when Roh Moo-hyun was elected president. Although Roh was not a heavyweight like elder politicians like the three Kims, he was a fresh face. Since Roh’s time, it hasn’t been politicians that led public opinion, but public opinion that created the politicians.

The most important foundation of public opinion is ideological tendencies. We need an endless debate on how to define ideology, and that is a job for scholars. Ordinary people often identify themselves as liberals, conservatives or centrists with little debate.

According to Hankook Research surveys conducted since 2000, about 30 percent of people identify themselves as liberals, while 35 percent are centrists and another 30 percent are conservatives. The remaining 5 percent gave no response or said they do not know.

In the latest survey in June 2019, 29.9 percent were liberals, 36.6 percent were centrists and 24.7 percent were conservatives. The conservatives are at about the same level as during Park’s presidency, but poll experts believe that it is only a matter of time before the conservatives recover. In fact, the regionalism of the traditional Honam and Yeongnam regions is the basis of the ratio, and any group can restore the 30 percent level easily during election campaigns, they said.

In the ratio of 30:35:30, we must pay special attention to the steadiness of the centrists. Since 2000, the liberals and the conservatives record fluctuations in polls, but the centrists remain unchanged. They have always been between 30 to 40 percent.

The ideological demography of the capital region, which has a large population, shows that the country will not be easily shaken. The soundness of the centrists shows us three points.

First, a radical change or shift of direction won’t be easy in our society. As long as the elections determine who will have power, anyone attempting to make a radical change will face fierce resistance from the centrists. We have already witnessed several election outcomes in which the centrists have handed down punishments against a group that rejected or threatened their identity.

Second, we are now able to have a serious consideration and politics of compromise. Because the political arena has long been a venue for dog fights, such an outlook may sound unrealistic.

In the past, the floor leaders of the ruling and opposition parties were often sly negotiators, but the current floor leaders always have aggressive attitudes. They are more fit to run YouTube channels than to work in the National Assembly.

Compromises have disappeared and conflict has become everyday life, and we agree that political techniques have degraded. But the soundness of the centrists will not let the situation continue for long. Spring is coming. The centrists will only allow a politician who is capable of taking serious consideration and making compromises lead the country.

Third is the fact that the centrists will be able to become an independent variable, not a subordinate variable. We have already seen that manifesting when Ahn Cheol-soo first entered politics. Although he is gone now, it doesn’t mean that the desire is gone.

It remains to be seen if the centrists will create a new political party or a leader in the near future, but it is safe to say that they have grown powerful enough to decide who will win the upcoming election.

It is hard to understand why the ruling or opposition parties are only obsessed with their own 30 percent of the country. The centrist voters in the capital region are looking for a capable politician, but the Blue House and the ruling party, as well as the conservative opposition parties, continue to ignore them.

They only care about their longtime, loyal supporters. President Moon Jae-in appeared to be making a series of mistakes that will allow the opposition to win the next presidential election, but opposition leader Hwang Kyo-ahn also appears to be turning down the opportunity by rejecting the center.

Which party will win the next election? Who will have the power? No matter what you do to rally your own supporters, you will only win 30 percent of the country. Right now, we are facing the next stage of our political development where the centrists begin to use their own power.