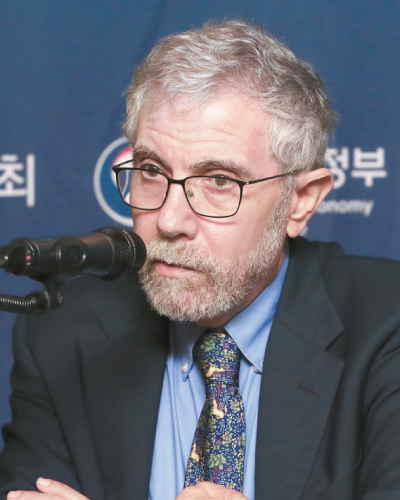 The U.S. economist offered his support for the Korean government’s plan for a record-high budget next year, dismissing concerns about the country’s fiscal health and highlighting the urgent need to spend during times of economic uncertainty.

“Korea has a very favorable budget position and plenty of room for fiscal stimulus,” said Krugman on Monday at the 2019 Knowledge Sharing Program Dissemination Conference held at the Conrad Seoul hotel in western Seoul.

While in Korea, he also met with Deputy Prime Minister Hong Nam-ki.

“This should be undertaken now, especially because there are hints of a Japan-style slide into deflation, and you want to act boldly to prevent that from happening before it becomes embedded in the economy.”

The government has proposed a record 513.5 trillion won ($431 billion) budget for next year that raises worries on rising government debt.

Korea’s national debt-to-GDP ratio, a measure of fiscal health, however, is expected to be at 39.8 percent next year, far lower than other comparable economies.

The average figure for Organisation for Economic Cooperation and Development members is 110 percent.

Krugman also urged Korea to maintain its ties to the global supply chain as much as possible against the rise of protectionist trade disruptions stemming from the conflict between the United States and China.

“The important point is for Korea not to be treated as being part of anyone’s trading bloc […] but simply continue to be a part of supply chains that extend across the world,” said the City University of New York professor. He added that an economic crisis in China could be a possibility.

“The Chinese have repeatedly defied pessimistic projections,” said Krugman. “Perhaps now, the trade war could be a trigger for a broader crisis.”

The Korean government has cited the U.S.-China conflict as a major factor in weak exports. Outbound shipments from Korea last month fell on year for the ninth consecutive month, plunging 13.6 percent from the previous year.

The economist addressed the growing conflict between Korea and Japan, while acknowledging that Korea is left with few options for response.

“I don’t think you have an alternative,” said Krugman. “It’s a bad thing for longer-running growth prospects to have this kind of disruption.”

“It does appear that Japan is behaving oddly.”

Since Japan strengthened export controls on industrial materials sold to Korea in July over a diplomatic row over forced laborers during the colonial period, Tokyo has removed Seoul from its list of preferential trade partners.

Korea announced a similar measure against Japan in response.