Ben-Hur is back, with a new take: Han Ji-sang took the chance to explore his character and work on his physique

Ben-Hur is back, with a new take: Han Ji-sang took the chance to explore his character and work on his physique 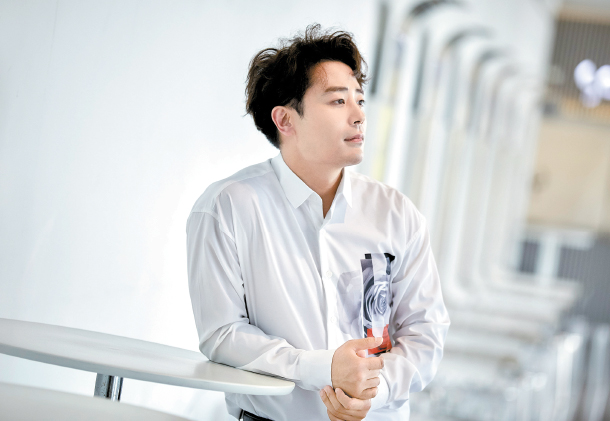 For musical lovers, actor Han Ji-sang is a familiar face. The musical star has been a regular fixture on stages in the country for the past 15 years, and he is back as Judah Ben-Hur in one of the most acclaimed musicals from this summer until fall.

“Ben-Hur” is adapted from the novel under the same title which instantly became a best-seller in 1880 when it was published. The film adaptation also won 11 Academy Awards. It’s not the first time the musical will be hitting Korean stages. In 2017 it was well-received and credited as being a musical which widened the horizons of the local genre.

Now Han is portraying the protagonist Judah Ben-Hur who starts off as a wealthy Jewish aristocrat living in Jerusalem with his family in A.D. 26. Although he is an advocate of Jewish people’s freedom from Roman rule, he remains submissive about his views. However, when his best friend Messala betrays him and throws his whole family into ruins, he spirals into an array of adversities before emerging as a better man.

“Although Ben-Hur has to endure sorrows that tear his life apart, he matures and learns to forgive because of them,” said Han in an interview with the press at a cafe in central Seoul. 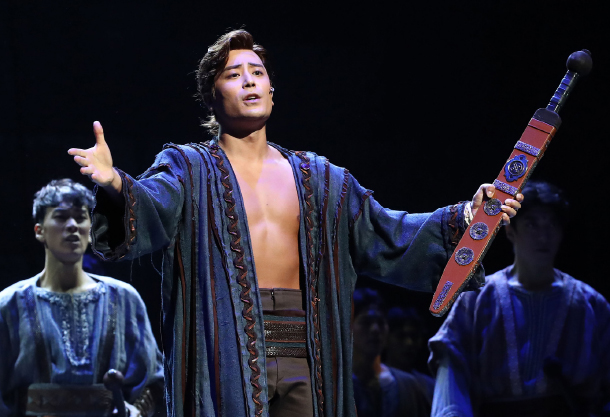 Han Ji-sang portrays the role of Judah Ben-Hur in the acclaimed musical “Ben-Hur.” The musical will be in theaters until Oct. 13 at Blue Square Interpark Hall in central Seoul. [YONHAP]

Q. What kind of Ben-Hur do you want to portray? How is your Ben-Hur different from the former musical?

A. I think the overall musical plot became more friendly, more specific than the former. What I mean is that Ben-Hur goes through a lot of pain but manages to overcome each difficulty that lies in his path, and that process was more detailed in this musical. [This is important because] that is how the character changes and develops into the just person at the end.

You seem to take on roles in which characters go through many trials and ordeals in their lives.

I didn’t intend to, but I guess I do. But Ben-Hur seems to be the character that goes through the most transitions amongst the other lead roles I’ve portrayed. He may be flawed at first, but [through overcoming the hardships], he turns into the strongest hero.

I thought Ben-Hur was the most mortal character I’ve played because he is caught up in a certain period in history, and it’s about how he deals with the hardships: He might fail, feel frustrated at his failures but eventually he overcomes them. And this whole process is very humane because, well, he is a human.

For “Frankenstein” (2015), the monster’s physical appearance was more important than his dialogue. But for Ben-Hur, every word he says or feels counts because it was such good dialogue, so I wanted to portray it well.

The musical is also about a mortal seeking answers from God, but he is not able to easily acquire them or even understand them. In “Napoleon” (2017), his tragedies as a immigrant and as a lower class person can be sympathized with, but in Ben-Hur, the message is more universal in a way that it questions the presence of a Messiah and his answers that we’ve always had this desire to find out.

How did you design your character? What kind of steps did you take to structure his personality?

The hardest and simultaneously the easiest part was working out and getting my body ready to play Ben-Hur. It’s not easy, but the answer is very clear. Our bodies are very honest: When we pay the price, the consequence is immediately shown. But it’s just so tiresome. That’s a pretty powerful motive [to not to work out] (laughs). But I know that the audiences do not come all the way here just to hear my voice. They are here to see and hear everything, and I want to give the best I’ve got and have them leave their seats feeling satisfied from all aspects.

Another part of the character that was hard to portray was his leniency. He is a peace lover at first. He knows what’s wrong [in the world], but he prefers to resolve things peacefully. In other words, he’s not a go-getter. And the audience can feel this as they see how docile Ben-Hur is at the beginning of the play. So when we were practicing, I was directed not to [be] so fierce or determined in the beginning, but it was difficult balancing the line between idleness and Ben-Hur’s passiveness.

Ben-Hur’s mother persistently tells him that they have to keep on fighting for justice. As the character is betrayed, stripped from his family and his royal standing and ends up in the lowest part of the class hierarchy, he learns and grows, developing into a more active character that takes problems into his own hands. I think that [much] of the audience can sympathize with Ben-Hur’s transition. We all fantasize about a hero that cannot pass any form of injustice he encounters in the street.

What part of your career do you think you’re in?

I feel that the first quarter of my career is over. I’ve been in this business for 15 years now. I opened up the second quarter of my acting career with “King Arthur” this spring, and “Ben-Hur” will be the second work this year. I still believe that I have a long way ahead of my career, but I have a good foundation that I’ve built myself upon with many years playing supporting roles. Although performing and keeping in shape for my roles are hard sometimes, I feel that all of my hard work is paid off when I go out to take curtain calls. They inspire and motivate me to work harder.