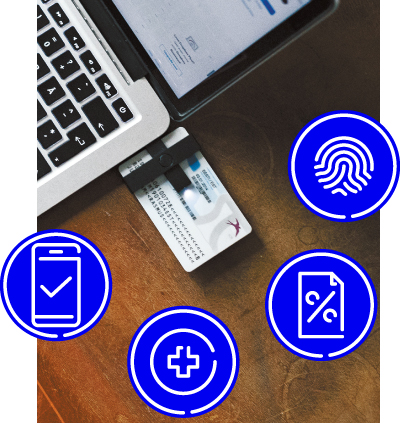 TALLINN, Estonia - The digital success story of Estonia is remarkable.

The country of 1.3 million people only gained independence from Soviet occupation in 1991, but is now home to four start-ups valued at more than $1 billion including Skype and Transferwise. Nearly all the country’s public services, from taxes to personal hospital records, are available online on one simple platform and Internet coverage is universal.

What’s the secret behind Estonia’s impressive feats? The key is a nationwide hope for a successful digital future, according to Anett Numa, a speaker at the e-Estonia Briefing Centre.

“After independence, our new and young parliament decided that we had to go digital. It was a risky decision,” Numa explained at one of the center’s briefing sessions last Tuesday. Part of government institution Enterprise Estonia, e-Estonia offers detailed overviews of the country’s digital history and achievements to foreign visitors for free.

“Because Estonia itself is very large, we also realized that digitalization [of public services] would be a solution because we couldn’t afford to have offices in every small town,” said Numa. “For Estonian society, that was something completely new, so we decided to make a lot of investment into the IT sector and start programs in universities. We provided computers to all elementary and high schools, universities and libraries for those who didn’t have them at home.” 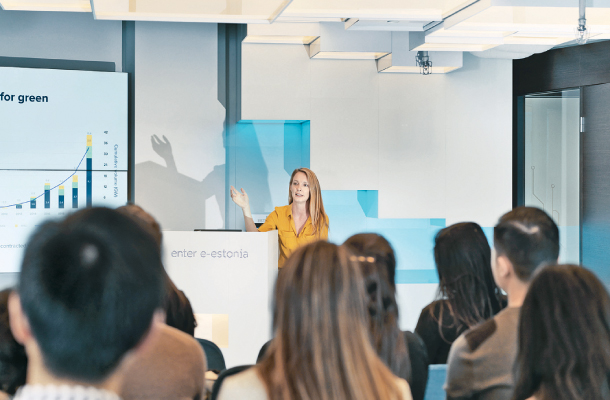 A history of learning

Estonian leaders realized from early on that education, especially in technology and science, was integral to nurturing young people who could go on to contribute to Estonia’s dream for a digital society.

Despite its long history of occupation by neighboring powers, Estonia actually enjoyed a tradition of learning that continues to this day. In 1881, some 94 percent of Estonians were already literate and there was compulsory and free education for six grades by 1940, according to Hitsa, a government-founded institute that promotes technology in education.

But it was from 1997 that the Estonian government really began focusing on technology education through an ambitious initiative titled “Tiger Leap.”

“Here in Estonia we don’t have tigers,” explained Eva Toome, communication manager at Hitsa. “But in the 1990s we didn’t have money and time to take things step by step, so we had to jump like a tiger.”

Under the Tiger Leap initiative, the government launched many projects like placing computers in public venues across Estonia, and even had people dress up in tiger costumes to generate interest. By 2001, all schools in Estonia were connected to the Internet.

Today, there are dozens of private and public institutions that work towards providing the best resources for educating children in Estonia using technology.

For example, eKool, also known as eSchool, is an online platform that provides information on students’ grades, attendance records and lesson notes to students, parents and teachers, leading to a host of benefits like decreasing teachers’ administrative work and improving communication between home and school. The Tallinn Education Department credited the program for helping Estonian students become some of the highest scorers on the Organization for Economic Cooperation and Development (OECD)’s Programme for International Student Assessment tests.

If eKool uses technology to create a learning-friendly environment, Hitsa’s ProgeTiger program exposes and familiarizes children as young as 5 with computing. Around 94 percent of schools and 68 percent of kindergartens in Estonia participate in the program, which trains teachers, offers lesson materials and supplies child-friendly computing equipment like robots that run on simple algorithms. 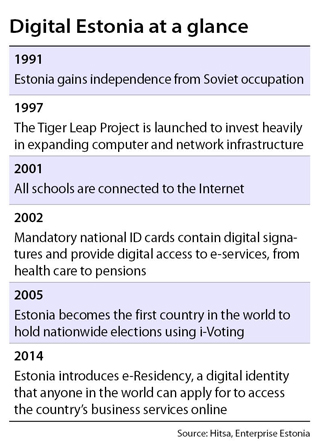 An early exposure to technology is important because as adults, Estonians will find that their entire society, from the home to parliament, runs on a digital network.

Since 2002, all Estonians have been issued digital identities in the form of ID cards and personal codes that they can use to access nearly every public service, from medical prescriptions to birth and death certifications, at any time of day. The lack of a need to create paper documents or staff physical offices is estimated to save the Estonian government 2 percent of its state GDP.

Digital services not only simplify the lives of regular citizens, but facilitate governance as well. Politicians use what’s called e-Cabinet to pass laws, while 30 percent of all Estonian voters use the online voting service wherever they are in the world.

In 2014, the Estonian government decided to take the next step and issue digital identities for non-Estonian citizens as well. Under a program called e-Residency, which approximately 1,500 Koreans have also signed up for, anyone in the world can gain access to a selection of benefits Estonians already enjoy including running businesses online with access to EU markets.

The e-Estonia Briefing Centre itself is proof that the Estonian government’s gamble to go digital paid off. Every year, it welcomes more than 900 delegations from across the world who are curious to learn more about the Baltic state.

“Back at the time there was no guarantee that this would be successful, but I can tell you now that this has been a real success story,” said Numa.