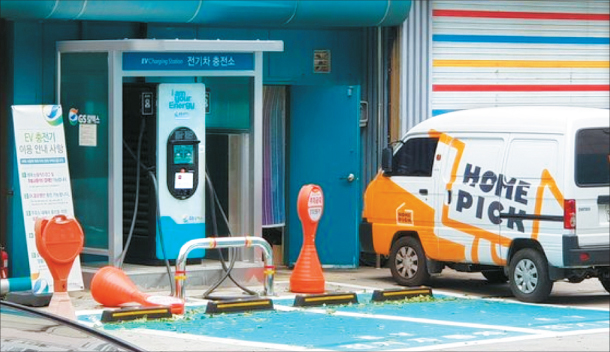 EV chargers and a van from Homepick, a parcel delivery service, are visible in front of a GS Caltex gas station in Jung District, central Seoul, on Sunday. [IM SOUNG-BIN]

Electric vehicles (EV) are not yet the mainstream in Korea, but gas stations are already expanding battery charging stations for EVs in an effort to get a firm foothold in the burgeoning market. But that’s not all - in an effort to take advantage of the large footprint of your average gas station, they also operate as logistics hubs.

At a GS Caltex gas station in Jung District in central Seoul on Sunday, two EV charging stations were positioned right next to a regular old gas pump. Installed in May, they are high-speed battery chargers that are capable of charging up to 100 kilowatts. A small vehicle can be charged up to 80 percent with the charger in 30 minutes.

The gas station also offers storage for parcels, which is especially useful at this time of the year when people send each other presents to celebrate the Chuseok harvest festival that begins on Thursday.

GS Caltex in May installed fast-charging equipment for electric vehicles at seven of its directly managed gas stations in Seoul. It currently offers 16 similar stations at 14 of its gas stations.

“We are negotiating with our franchise gas station operators to locate more equipment for charging electric vehicles,” said a spokesperson for GS Caltex. “We plan to expand the infrastructure for electric vehicles.”

“We are offering charging for free for three weeks until [Sept.] 23 to celebrate the launch of the service,” said a spokesperson for SK Energy. “We accommodate both DC (fast charging) and CHAdeMO [plugs for high-power DC charging of electric vehicles].”

SK Energy plans to expand the number of gas stations with such electric charging equipment to 40 by next year and 190 nationwide by 2023.

“We aim to transform the SK gas stations into a foothold for drivers of all vehicles,” said Lee Yoon-hee, head of SK Energy’s retail business.

With the first- and second-largest gas station operators having jumped into building charging infrastructure for electric vehicles, the general public perception that there aren’t enough charging stations to make driving an EV worthwhile will likely begin to change.

The number of registered EVs in Korea stands at 72,814 as of late June, but firms are jumping into the market in a desperate bid to dominate the burgeoning industry.

The gas station market in Korea is currently saturated, with the number of gas stations standing at 11,300 nationwide. With the consumption of fossil fuels on the decline, their performance has dropped, meaning gas stations need to come with new ways to make money or risk going out of business.