How to avoid traffic this Chuseok

How to avoid traffic this Chuseok 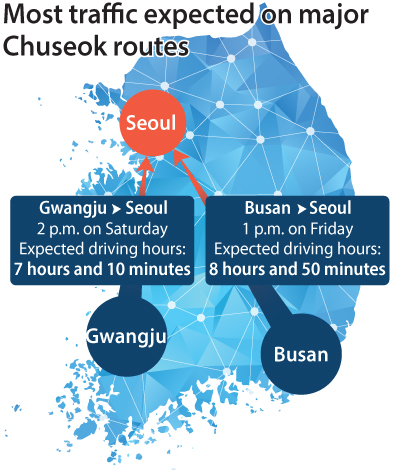 Traffic congestion is unavoidable during the Chuseok holidays, but if you have to head south this year, the best time to go is on Wednesday morning or Thursday afternoon, according to SK Telecom’s T map on Monday.

The navigation app operator made its traffic projection for the upcoming harvest festival from Wednesday through Sunday based on its records from the past five years.

T map said the best time to leave Seoul is before 11 a.m. on Wednesday or after 4 p.m. on Thursday.

Congestion for the Seoul-Busan route will be heavy on Friday due to those leaving and returning to Seoul and travelers visiting Busan.

Traffic on the Seoul to Gwangju route is likely to be heavy starting at 2 p.m. on Wednesday until 8 p.m., with the peak at 4 p.m.

If drivers leave Gwangju at 2 p.m. for Seoul on Saturday, they will likely spend seven hours and 10 minutes on the road, which is two hours and 40 minutes longer than what the journey usually takes.

T map said it will display information on some 13,000 free parking lots nationwide that are close to drivers’ destinations during the holidays. It will also offer a real time service that evaluates driving patterns based on speed and abrupt acceleration and deceleration.

“As a widely used navigation operator, T map will continue to realize social values that could foster safe driving for the entire nation,” said Jang Yoo-seong, head of the mobility division at SK Telecom.

SK Telecom’s rival KT said Monday it will expand its 5G coverage nationwide in time for the holidays. KT said it performed quality tests for the 5G network and boosted coverage to include key highways and expressway rest areas nationwide.