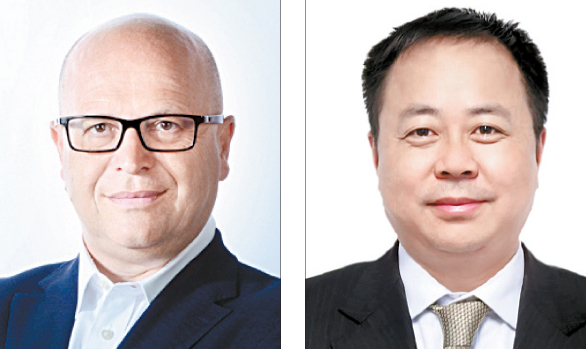 Hyundai Motor Group has hired two new executives as it strives to boost sales in China and improve the competitiveness of its Genesis brand.

The automaker announced in a statement Monday that it has hired former Lamborghini design chief Filippo Perini to serve as chief designer for Genesis Advanced Design in Europe. The appointment is effective next week.

Perini will be working with designers in Korea to enhance Genesis models based on his years of experience with European premium brands like Alfa Romeo, Audi and Lamborghini.

In his time at the Volkswagen Group starting 2003, Perini designed the Audi A5 Coupe and TT concept car. After moving to Lamborghini within the group, he took part in designing the Reventon, Murcielago and Huracan sports cars.

He has been praised for successfully establishing a representative design concept for the Italian luxury sports auto brand.

Kia is a Hyundai subsidiary.

As the new CEO of Dongfeng Yueda Kia Motors, Feng will be in charge of all sales and operations in China. The group said Feng’s deep understanding of the Chinese market from holding positions at various Chinese companies will greatly help Kia Motors improve its standing in the market.

Between January and June this year, Kia Motors produced 153,500 vehicles in China, down 12.8 percent from 176,000 units made during the same period a year earlier due to the company’s unsuccessful strategy in the country.

Feng previously held a senior position in Hyundai Motor’s Beijing branch between 2009 and 2013.

Jin Byung-jin, the current head of the joint venture, will be transferred to the United States to lead Hyundai Motor Manufacturing Alabama in Montgomery, Ala.