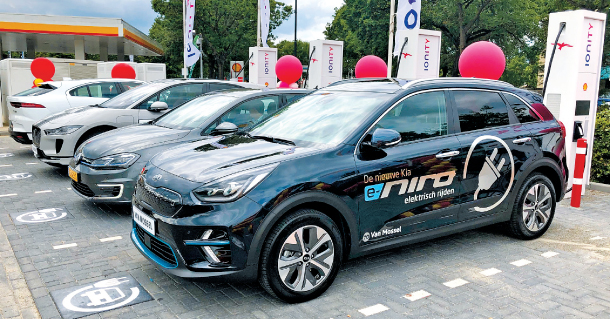 The group did not disclose the amount of its investment but said it will obtain a 20 percent stake in Ionity, a joint venture of BMW Group, Daimler AG, Ford Motor Company and the Volkswagen Group established in 2017. The founding partners also hold equal shares in the joint venture, the Korean company said.

Hyundai said its participation will provide enhanced benefits for Hyundai Motor and Kia Motors’ European customers as they will be able to use Ionity’s high-power charging facilities.

Ionity already has nearly 140 charging stations in Europe in operation. Fifty more stations are under construction.

The joint venture’s goal by 2020 is to expand its network to 400 high-power charging stations, with an average of at least one site every 120 kilometers (75 miles) along major European highways, Hyundai said.

The time taken to charge 80 percent of the battery is mostly used to compare a car’s charging time, since cars charge significantly slower afterwards to protect the battery system.

“Our participation in this joint venture reaffirms the group’s commitment to future ‘electromobility,’” said Thomas Schemera, executive vice president and head of the product division at Hyundai Motor Group. “I am confident that our work with Ionity will open a new era of high-power charging experiences, where charging will be seamless and easier than refueling for our customers.”

The Korean group is hoping Hyundai and Kia will sell more electric cars in Europe based on its partnership with Ionity. The group is expecting electric cars to account for 20 to 30 percent of the total European car market by 2030.

Hyundai and Kia have sold 23,000 electric cars in Europe in the first half of this year, which is a roughly 200 percent increase year-on-year.