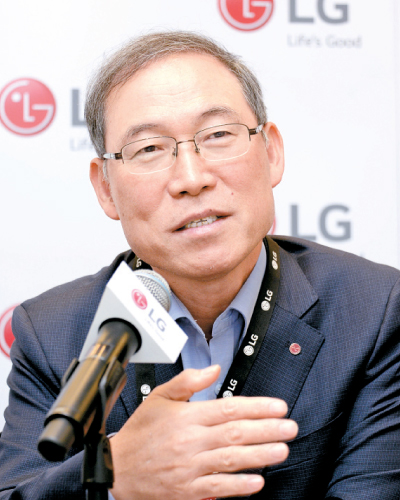 The electronics company first started the built-in business in 2016. Now it runs more than 200 showrooms across markets including Korea, the United States and Europe.

At a press conference with local reporters at IFA 2019 held in Berlin, Song admitted that sales were not great as the business was young but expressed confidence that LG would soon climb up the global ranks.

“At the moment, we’re focusing on sorting out the global sales network and establishing a team, but in three years by 2023, we’ll be top-tier,” Song told Korean reporters during a press conference on Saturday in Berlin. At LG, Song is in charge of the home appliance and air solution businesses.

“Built-in appliances are different from consumer products. They’re included in the planning stage of houses - so it takes time [for the business to grow] and requires a lot of early-stage investment,” added Song.

During the media session, Song laid out directions for LG’s appliances business in the future. Apart from functionality, LG would focus on developing products that harmonize with customers’ living spaces - in ways like enhancing design or adding IT services that are not directly linked to the product’s function.

“We want to go beyond offering convenience and present appliances that can harmonize with your living room, bedroom and kitchen,” said Song.

At IFA 2019, LG dedicated the largest proportion of its booth to its “LG ThingQ Home” demonstration zone, which puts together home cinema systems, TVs, refrigerators and its laundry machine powered by artificial intelligence (AI) to show how AI assistants, including its own and those from Apple and Google, can work together.