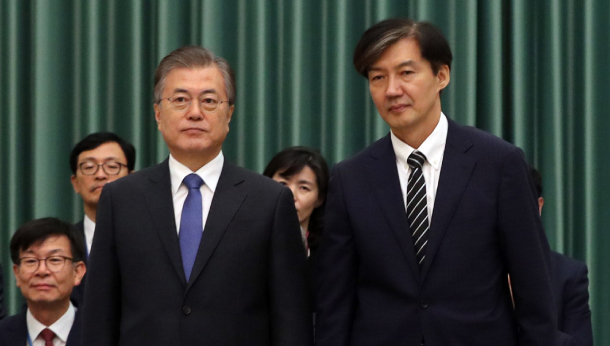 President Moon Jae-in, left, poses with Cho Kuk, right, after conferring on Cho a certificate of appointment as justice minister in the Blue House in central Seoul on Monday. [YONHAP]

Following the appointment, Moon made an appeal to the public, saying he believed it was more important for him to push forward reforms of powerful agencies including the prosecution than avoid political turmoil.

“Cho was surrounded by many scandals, and his wife was prosecuted,” Moon said. “There was a fierce confrontation between those supporting and opposing the appointment. I had serious contemplation, as the situation unfolded and split public sentiment. But I decided it was more important to stick with principle and consistency.

“All procedural conditions were completed, including a confirmation hearing at the National Assembly, and no clear criminal activity that Cho was liable for was confirmed,” Moon continued. “If I do not appoint him just because of suspicions, it will set a bad precedent.”

Moon made his appeal at Cho’s appointment ceremony. The Blue House made the rare move of allowing a live broadcast of the event, in which Cho and six other top officials received their appointment letters.

Moon said he is responsible for faithfully implementing presidential campaign pledges, and reforming the law enforcement bodies was one of his most important promises. Although progress has been made, it needs to be completed, Moon said. Cho, who served as his senior secretary for civil affairs until July, will complete the job, he said.

“I don’t want this determination to be discouraged,” Moon said. “I ask for the people’s understanding and support.”

“But the prosecution has clearly proven its intention to unsympathetically investigate the scandals,” Moon said, referring to the ongoing steps the prosecutors have taken to probe the Cho family. “When the prosecution does what it needs to do, and when the justice minister does what he has to do, it will also demonstrate the reform of the powerful agencies and advancement of democracy.”

The prosecution is currently investigating two main scandals involving the Cho family: admissions fraud on behalf of Cho’s daughter and suspicious operation of a private equity fund invested in by the Chos.

Cho’s wife Chung Kyung-sim was criminally charged Friday with faking an academic award for her daughter, which was used as a part of the daughter’s application to Pusan National University’s (PNU) medical school. The 28-year-old daughter is currently a student there.

The prosecution is also investigating the Cho family’s investments in a private equity fund. Prosecutors on Monday asked a local court to issue detention warrants for the operator of the fund and a businessman whose company received a massive investment by the fund.

Moon admitted Monday that he felt the people’s disappointments at the administration’s failure to keep its promise to promote fairness and justice. “I am heavy-hearted,” Moon said. “The government will seriously respect the people’s demands.”

He, then, said the administration will carry out more reform measures, particularly regarding high school education and college admissions.

The appointment generated fierce political protests from the opposition. “It is devastating,” said Rep. Na Kyung-won of the main opposition Liberty Korea Party (LKP), calling the appointment “the most unfortunate incident in the history of Korea.”

Na said her party will hold a meeting of its lawmakers to decide how to fight the appointment. Boycotting legislative sessions, submitting a motion to dismiss Cho, conducting a parliamentary investigation and appointing an independent counsel to probe the scandals were seen as possible moves. “We will use all possible means to fight,” Na said.

Bareunmirae Party leader Sohn Hak-kyu said Moon must remember why his predecessor, Park Geun-hye, was impeached. “Why was she impeached and sent to prison? Moon must reconsider his decision,” Sohn said. “He must withdraw Cho’s appointment.”

Sohn said the Cho scandal touched a particularly sensitive issue: fairness in education opportunities. “Unless Moon recants the appointment, the people will rise up, and the Bareunmirae Party will rise with the people,” he said.

Tensions between the Blue House and the prosecution also escalated, as the ruling party and presidential aides condemned the ongoing criminal probes into Cho’s family as an attempt to resist reforms.

The prosecution said it will continue its probes, regardless of Cho’s appointment. Depending on their progress, Cho may become the first justice minister to be interrogated by his own prosecutors.

Cho, when he was nominee, promised that he will not receive any briefings from the prosecution about the probes into his family.

Speculation was already rife among prosecutors that the Blue House and administration will use all possible means to influence the probes. “The appointment shows the Blue House’s confidence that it can subdue the prosecution,” a senior prosecutor told the JoongAng Ilbo.

Prosecutors also said the Justice Ministry, which has appointment, budget and audit rights over the prosecution, may use those powers to pressure them.

The prosecution, including Prosecutor General Yoon Seok-youl, made no official response to Moon’s appointment of Cho as justice minister, but some prosecutors are resisting the decision. “This is a de facto declaration of war,” said a senior prosecution official.

Experts in the legal community said it may be unavoidable for an independent counsel to be appointed to probe the new justice minister and his family.

“Because the justice minister is a subject of the investigations, the legitimacy of the prosecution’s probe will eventually be questioned no matter what conclusion it will draw,” a lawyer who once served as a district prosecution head told the JoongAng Ilbo.

Of the seven, only Kim passed the hearing. The lawmakers did not confirm the remaining six, but Moon still appointed them.

Although it has been a tradition for spouses of the appointees to attend the appointment ceremony, the Blue House didn’t invite them because Cho’s wife is a criminal suspect.