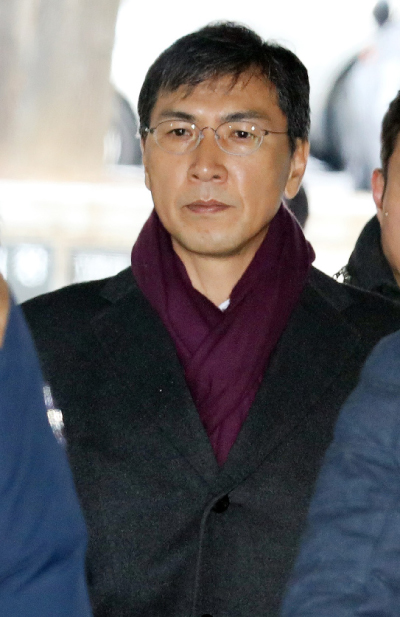 The Supreme Court Monday sentenced former South Chungcheong Gov. An Hee-jung to three years and six months in prison for raping and sexually assaulting his personal assistant, Kim Ji-eun, 34, effectively ending the career of one of the country’s leading presidential hopefuls and delivering a victory to Korea’s Me Too movement

An, 54, who came in a distant second to President Moon Jae-in in the ruling Democratic Party’s primary race for the 2017 presidential election, was found guilty on ten different counts of sexual abuse from July 29 to Feb. 25, 2017 including “sexual intercourse by abuse of authority.”

“When the court adjudicates a sexual assault or harassment case, it considers the issue of sexual discrimination in the context of that case and strives to realize gender equality by respecting the principle of ‘gender sensitivity,’” said Supreme Court Justice Kim Sang-hwan, who presided over An’s sentencing.

“Lightly ignoring the honesty behind the victim’s testimony without sufficiently considering the special circumstances the victim was placed in, in each individual and specific case of sexual abuse cannot be regarded as a proper evaluation of evidence based on the values of justice and equality.”

Monday’s ruling concludes a roller coaster of a scandal that took gender relations in Korea to a place they had never been before. After Kim Ji-eun revealed she was a victim of An’s abuse in a live interview with JTBC in March last year, dozens of women went public with sex abuse claims against a variety of high-profile figures in a mass movement that made 2018 the year of Korea’s Me Too movement.

In August 2018, however, a district court acquitted An of rape and sexual assault by casting doubt on Kim’s testimony and the supposed “dissociative state” she claimed she was in when she was a victim of his abuse.

The case took a major turn last February, when the Seoul High Court reversed this decision and placed An under immediate detention while sentencing him to three and half years in prison for rape and sexual assault. Nine of the 10 charges of sexual assault claims by Kim were accepted by the court, which acknowledged that Kim’s testimony in the case was “natural” and that she had no reason to falsely accuse An and would not benefit from his downfall.

The Supreme Court on Monday upheld the entirety of the Seoul High Court’s verdict, adding that while An may not have used physical force, his social, economic and political position placed him in a position to exert power over Kim and render her vulnerable to sexual abuse.

Yet among judicial analysts and observers of Korea’s court system, the logic presented by the Supreme Court in An’s sentencing is expected to generate controversy, particularly due to the shaky legal foundation behind the principle of “gender sensitivity” that some say is an example of judicial activism.

Since it first emerged in the court lexicon in April 2018, “gender sensitivity” has become a term that loosely embodies the principle that the standards of evidence admissibility from women in sexual abuse cases should be relaxed since women are a social minority.

That notion remains a subject of intense disagreement among judges and lawyers, with many arguing it represents an attempt by courts to take an activist role in rectifying gender equality in society rather than serve as an objective barometer for evaluating criminal cases.

According to a report by The Korea Economic Daily from April, out of the 57 cases this year in which “gender sensitivity” was cited by the court, the female plaintiff won 56 cases - an unprecedented win rate for a single legal principle.

The verdict in An’s trial was met with jubilation by the feminist activists waiting outside the Supreme Court Monday. Thanking the court for upholding the rights of women, speakers said their 554-day struggle was vindicated by the decision, which they said would be recorded as a “new day” in which women attained a new form of justice.

Kim’s statement was the last word at the gathering, read out loud by an activist leader.

“Now I wish to return to my daily life,” her statement read. “I want to end all sorts of lies that inflict a secondary pain on me and return to the life of a regular worker.”