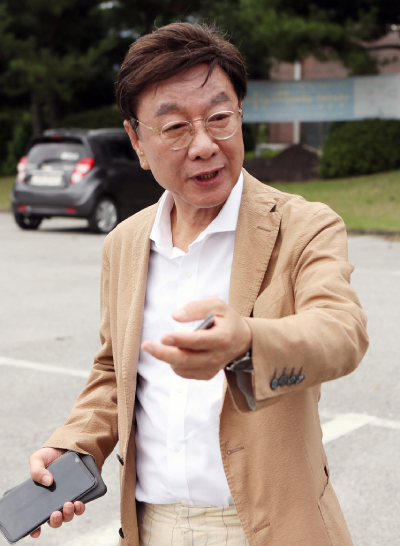 An internal investigative team at Dongyang University in Yeongju, North Gyeongsang said Monday that the group has “hit a limit” in its probe of Justice Minister Cho Kuk’s wife, an English professor at the university, because related documents were confiscated by the prosecution and allegedly involved faculty members have retired.

The team originally told local media that a final conclusion of the investigation on whether Cho’s wife forged an award for her daughter, among other irregularities, would be announced Monday afternoon. But when reporters arrived on campus, some 170 kilometers (106 miles) southeast of Seoul, they were told that no determination has been made yet and that the team would continue to dig deeper, while acknowledging difficulties in the process.

The press conference ended in just five minutes and the team’s chief, an economics professor at the school, refused to take any questions, raising speculation that Dongyang University has backed down after President Moon Jae-in went against public sentiment by formally appointing Cho as his justice minister earlier that day.

Dongyang University President Choi Sung-hae, who publicly raised suspicions against Cho and his wife, could not be reached on Monday after Cho’s appointment.

Dongyang University’s investigative team was launched last week with five professors and faculty members to figure out whether Cho’s wife, Prof. Chung Kyung-sim, used her status to allow her son and daughter to participate in various programs at the school despite their lack of qualifications and fabricate awards in the name of President Choi without his knowledge.

Prosecutors allege Cho’s daughter submitted the award as part of her application to Pusan National University’s medical school, where she’s been a student since 2015.

Choi told local media outlets that before Cho’s confirmation hearing on Friday, he received a call from Chung, who asked him to say that he had authorized her to issue the presidential award for her daughter. Choi said after he refused to comply, Chung put Cho on the phone, who pressured him to accept his wife’s request.

In Monday’s press conference, Dongyang University’s investigative team said it was collecting and reviewing documents related to Chung’s allegations, as well as asking questions to former faculty members who worked for the school at the time of Chung’s alleged misdeeds. The team, however, said the process was tough because prosecutors raided the school and took away their references, and because their former colleagues, who could provide testimonies, were no longer physically on the school campus to be easily summoned.