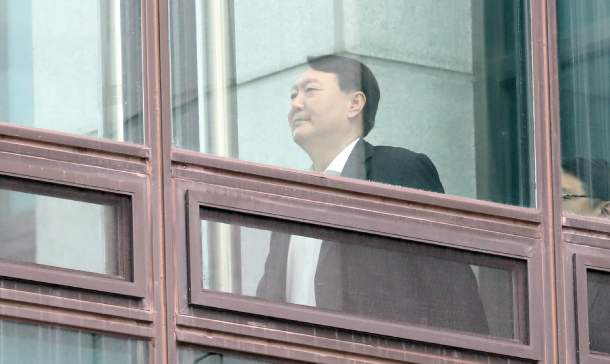 Prosecutor General Yoon Seok-youl walks to the in-house cafeteria of the Supreme Public Prosecutors’ Office in Seocho District, southern Seoul, on Monday. The prosecution is investigating a litany of allegations against Justice Minister Cho Kuk and his family. [YONHAP]

Prosecutors filed a pre-trial detention warrant for two businessmen linked to suspicious investments made by Cho Kuk’s family on Monday morning, just hours before the embattled presidential aide was formally named the minister of justice.

It was the first time prosecutors from the Seoul Central District Prosecutors’ Office, who are investigating a web of allegations surrounding Cho and his family, filed a pre-trial detention warrant for anyone involved in the ongoing probe.

A local court will soon decide whether to issue the warrant.

Some of the most serious questions Cho faces relate to hefty investments his wife and two children made in a private equity fund, which he claims to know nothing about.

At around 9:10 a.m. Monday, two and a half hours before the Blue House officially announced President Moon Jae-in would tap Cho as justice minister, prosecutors filed a warrant for Lee Sang-hoon, 40, CEO of Co-Link Private Equity (PE), and a 54-year-old surnamed Choi, CEO of Wellscnt.

Soon after, Wellscnt’s performance started to take off as it landed deals with numerous local government offices and public companies.

Prosecutors believe PE violated the Financial Investment Services and Capital Markets Act by reporting to financial authorities Cho’s wife and their two children were going to invest 7.4 billion won in the private equity fund, when the trio only invested a combined 1.05 billion won. Also, when prosecutors raided Lee’s office on Aug. 27, they allegedly detected signs that Lee had ordered his employees to destroy evidence.

Choi is thought to have embezzled nearly 1 billion won worth of Wellscnt funds for private use.

Lee and Justice Minister Cho’s first cousin once removed, a 36-year-old man also surnamed Cho, who is suspected to be PE’s actual owner, are believed to be the two most knowledgeable figures about the irregularities.

The two men had recently fled to the Philippines after a hydra-headed scandal about the justice minister and his relatives hit the headlines, but only Lee returned to Korea following a request by prosecutors.

During a press conference on Sept. 2, the justice minister said it was only recently that he learned specifically about his family’s investments, calling himself “ignorant” when it comes to “economic and business” matters.Cho said his wife is also “not an investment expert” and that she was only taking advice from Cho’s first cousin once removed, who’s an “investment expert in the family.”

But when asked about connections to his first cousin once removed, Cho tried to distance himself, saying he only sees that relative once a year.