In the six amateur tournaments that Bae Yong-jun has competed in this season, he’s recorded top 10 finishes in every one including two wins and one runner-up finish. 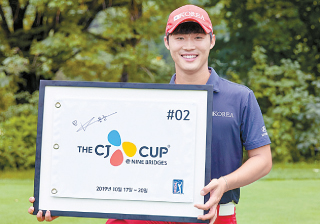 By topping the amateur points ranking this year, Bae Yong-jun earned a spot at the CJ Cup @ Nine Bridges in Jeju next month. [CJ GROUP]

At the latest tournament, Hur Chungkoo Cup The 66th Korea Amateur Golf Championship, Bae finished as runner-up, good enough for him to top the amateur points ranking at the Korea Golf Association (KGA) with 626 points.

By topping the points, Bae earned a spot at the CJ Cup @ Nine Bridges, the only PGA Tour event being held in Korea. The tournament will kick off in Jeju Island, from Oct. 17 to 20. The tournament grabs a lot more attention as this year’s field includes the current and former world No. 1s as well as a number of major champions.

“I really want to play against the world’s best players,” Bae said.

Since he was in third grade in high school - which was only last year - Bae’s been making quite an impression at amateur tournaments, which includes a win at the Korea amateur championship.

By finishing fourth at the national team qualifier in November last year, Bae also got to join the Korean team for the first time and has since represented the country in a number of international tournaments.

Having started college this year and continued his season as a member of the national team, his career continued to develop.

“By winning against an ace from the Japanese team, I gained confidence,” Bae said. “Once I returned home from hitting from a deep rough on the Japanese courses, I got to play easier [courses in Korea]. Thanks to that confidence, I got to finish toward the top of the standing in three straight tournaments after the Korea-Japan match.”

Bae’s strength is in his short game. At any distance, Bae stays calm when he putts.

“Yong-jun has great touch in his hands and he knows how to roll the ball,” said Kim Tae-hoon, head coach of the men’s national team. “Whether it’s an actual tournament or in training, Yong-jun’s putts make people feel comfortable.”

Last year, Bae also earned a spot at the CJ Cup by winning the Hur Chungkoo Cup Korea Amateur Championship. However, as the tournament overlapped with the national championship, Bae didn’t compete.

As this is the first time that he’ll compete at the CJ Cup, Bae dreams of playing with Brooks Koepka of the United States, current world No. 1.

“There may be a big difference in shot distance but I’m confident in my short game,” Bae said. “Whichever tournament I compete in, my goal is the top five. And it’ll be the same at the CJ Cup. I want to achieve my goal.”

“I want to turn pro sometime toward the end of next year, after I gain more experience,” he said.