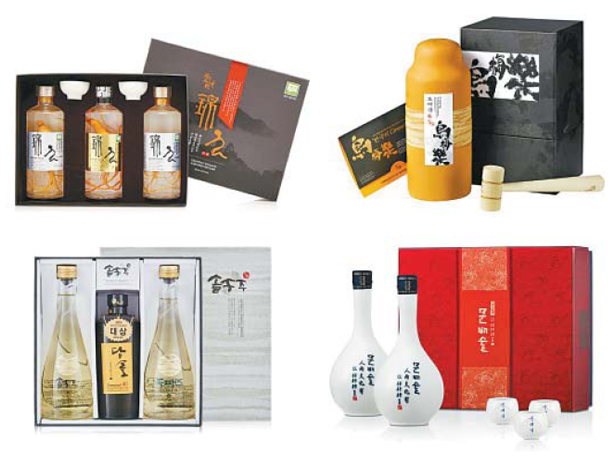 Traditional alcoholic drinks usually refer to the beverages made by those possessing intangible cultural assets, those that are designated as food masters and farmers who make the drinks using Korean agricultural products as the key ingredients, according to Ministry of Agriculture, Food and Rural Affairs.

The drinks include makgeolli, Andong soju and fermented fruit drinks.

The monthly sales of traditional liquors on the online shopping site TMON in August jumped 38 percent on year, while the on-year sales of the drinks from Sept. 1 through Sept. 8 skyrocketed 138 percent.

Monthly sales of traditional alcoholic beverages on Gmarket skyrocketed 248 percent on year from Aug. 10 through Sept. 9. Fermented drinks primarily made of azalea flowers led the growth, which was followed by soju, hard liquors and makgeolli.

“Since it became possible to purchase traditional alcoholic drinks online starting in 2017, an increasing number of consumers have begun searching for them both as a gift and for them to drink at home,” said a spokesperson for Gmarket.

“The fact that the drinks are heavy to carry and that they could be seen as a unique present for the harvest holidays also likely attributed to their boost in sales.”

Sales of alcoholic drinks, excluding the traditional alcoholic beverages, are prohibited online due to concerns about purchases made by underage customers. The legal age for drinking is 19.

Sales of the traditional alcoholic beverages on SK Telecom’s 11st inched up 22 percent from Aug. 9 through Sept. 8 compared to Aug. 20 through Sept. 19 last year, five days ahead of a month before the harvest holiday last year.

“Traditional alcoholic beverages used to be packaged in old-fashioned bottles that are similar to soju bottles,” said a spokesperson for 11st. “But traditional liquors these days are released in all sorts of trendy designs, which have snatched the interest of younger consumers.”

Industry insiders argue that the boycott against Japan may have also affected the rise in the sales of traditional drinks.

“We can’t completely deny the possibility,” said an industry source.