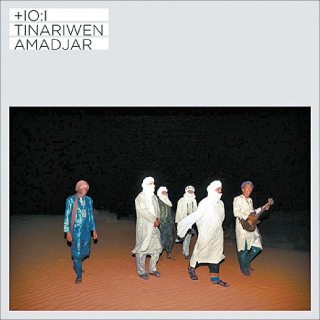 Tinariwen doesn’t need to create a mythology for or about themselves. The story of this West African band of nomadic Tuaregs from Mali includes exile, violent conflicts and an attachment to ancient traditions informed by current affairs.

Their latest release, “Amadjar,” is the epitome of desert blues. Recorded under a tent in the sandy outskirts of Nouakchott, the capital of Mauritania, the setting provides a more informal and natural, though far from laid-back, atmosphere.

Some songs reflect the seemingly similar challenges humanity is facing around the world. “Taqkal Tarha” says “Nothing has any meaning / Days follow each other and look the same,” while “Wartilla” claims that “The hardest thing is to see love and friendship disappear.”

Most, however, make direct and unmistakable allusions to their personal fates and political struggles. “Amalouna” is practically a manifesto - “Today, our future and our hope is an armed return to our homeland” and “Kel Tinawen” warns that “Evil tongues, you can keep talking / The uprising will be impossible to suppress.” AP