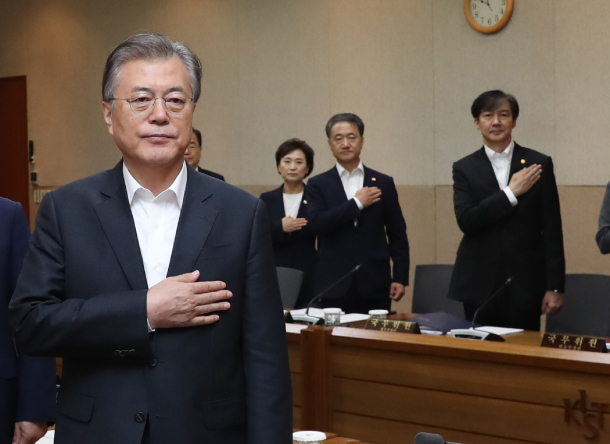 “In order to stop President Moon’s high-handedness and this administration’s reckless rule, all forces must rise up under the banner of liberal democracy,” Hwang Kyo-ahn, chairman of the main opposition Liberty Korea Party (LKP), said in a press conference in the morning. “I propose solidarity with the people to dismiss Cho and restore liberal democracy.”

Hwang said it is crucial for opposition parties, civic groups and the public to unite to save the country.

Immediately after the press conference, Hwang made a surprise visit to Sohn Hak-kyu, head of the opposition Bareunmirae Party. “I just came here without any prearrangement,” Hwang said.

The two leaders had a brief meeting that lasted about four minutes.

“The most urgent issue that we are facing is dismissing Cho,” Hwang said after the meeting. “I told Sohn that the parties that share the same opinions must unite.”

Hwang also met with Chung Dong-young, head of the Party for Democracy and Peace. Hwang and other leaders of the LKP, including floor leader Rep. Na Kyung-won, organized protests around Seoul throughout Tuesday to condemn Moon.

Na said Tuesday that the LKP is contacting other opposition parties to support a motion to dismiss Cho and conduct a parliamentary investigation into scandals surrounding the Cho family. The prosecution is investigating suspicions of admissions fraud involving Cho’s wife and daughter, along with the family’s investment in a private equity fund.

A majority of incumbent lawmakers is required to pass a motion to recommend dismissal of a cabinet minister. As of now, the National Assembly has 297 members, and the LKP needs at least 149 votes to pass such a motion. Na said she will contact opposition lawmakers to secure enough votes.

As of now, the ruling DP has 128 lawmakers. The LKP has 110, and the Bareunmirae Party has 28. The Party for Peace and Justice has four lawmakers, and the Our Republican Party has two. About 10 independent lawmakers who recently defected from the Party for Peace and Justice are working to form a new centrist party. Their group is temporarily named the Alliance for Alternative Politics.

Earlier in the morning, Sohn also held a press conference and announced that his party will host candlelight vigils every Saturday at Gwanghwamun Square in central Seoul to urge Moon to fire Cho.

Sohn said the protests will not call for Moon’s resignation or impeachment - yet. “Many people said we must demand a presidential resignation, but I still think it is time to pray,” Sohn said.

One of the side effects of Moon’s appointment of the controversial justice minister was the mending of an internal rupture in the Bareunmirae Party. Rep. Yoo Seong-min, one of the most prominent leaders of the party and a presidential contender defeated by Moon in 2017, attended the party’s leadership meeting on Tuesday, ending a boycott that he began in May.

“Appointing a criminal suspect as the justice minister is unprecedented not only in Korea but also in all countries around the world,” Yoo said. “It is a disgrace to the nation.”

Yoo stressed that conservative politicians must unite. He, however, said he had no contact with the LKP, the rival conservative party that he had abandoned years ago.

Rep. Lee Un-ju, an independent lawmaker, shaved her head in front of the National Assembly to protest Moon’s decision. “Democracy in Korea was murdered by President Moon’s high-handedness and arrogance,” she said.

An opinion poll showed the nation was split over Moon’s appointment of Cho. According to a Realmeter’s poll conducted on Monday, 49.6 percent of the public said they disapprove of the appointment, while 46.4 percent said they approve. The 3.1 percentage point gap was within the margin of error of plus or minus 4.4 percentage points. According to the poll, 3.8 percent of the respondents gave no response or had no opinion.

The ruling DP criticized the opposition Monday for trying to initiate a motion to dismiss Cho. “It’s less than a day since Cho was appointed,” Rep. Lee In-young, DP floor leader, said during a party meeting. “How can you evaluate the minister and pass a dismissal motion? Why are they talking about a parliamentary investigation and an independent counsel probe?”

The DP also criticized the prosecution for investigating the Cho family. “No matter what the prosecution’s intention was, it infringed upon the president and the National Assembly’s rights to vet the nominee,” Rep. Cho Jeong-sik, chief policymaker of the DP, said. “The prosecutors must perform their duties faithfully and make sure there will be no controversy about a political intention.”

According to the Justice Ministry, Cho told senior officials of the ministry that he won’t review reports from the prosecution about the investigations into himself and his family or the progress of any eventual trials. Cho’s wife was prosecuted on Friday and will stand a trial at the Seoul Central District Court. Those remarks were made on Monday when Cho hosted his first meeting with senior ministry officials shortly after his inauguration ceremony, the ministry said.

Meanwhile, Cho attended his first cabinet meeting on Tuesday. Instead of holding the meeting at the Blue House, Moon hosted it at the Korea Institute of Science and Technology (KIST) to stress his campaign to invest in the country’s component and materials industries.

KIST, ironically, was one of the places involved in the admissions fraud scandal involving Cho’s daughter. Her internship certificate, submitted as a part of her application to the medical school of Pusan National University (PNU) was suspected to be forged, and prosecutors are investigating.

“The cabinet meeting at KIST was scheduled a long time ago,” a Blue House official was quoted as saying by the Kookmin Ilbo. “It was intended to encourage research institutes in the supply crisis due to Japan’s export restrictions. It has nothing to do with Cho.”