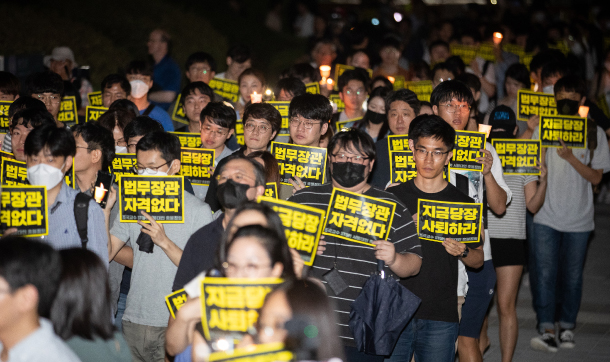 Students of Seoul National University stage a candlelight vigil on their campus Monday night as they chant Cho Kuk is not qualified for justice minister. [NEWS1]

Hundreds of students denounced President Moon Jae-in for ignoring their calls to withdraw the nomination, accusing Cho’s daughter of receiving preferential treatment in admissions and scholarships.

Cho’s daughter earned her bachelor’s degree from Korea University, after which she entered SNU’s Graduate School of Environment Studies for her masters. She dropped out of SNU to start medical school at PSU in 2015.

After Cho was named justice minister, an online forum of Korea University, which was used to organize three candlelight vigils against his nomination, flooded with rage-filled posts, some suggesting a massive anti-Cho rally be held at Gwanghwamun Square in central Seoul and nearby universities be invited to join.

“It’s meaningless to hold a rally on the school campus now that the president went ahead and appointed [Cho],” wrote one student. “It would only be meaningful to hold a rally at Gwanghwamun Square. I don’t think the government even cares about school protests,” wrote another.

SNU’s third anti-Cho rally was held on the school’s campus in Gwanak District, southwestern Seoul on Monday at around 6 p.m. with about 500 SNU undergraduates and graduates in attendance, according to the school. Cho is a professor at SNU’s law school. “We’re not here today because we’re conservative or progressive,” said Kim Da-min, vice president of SNU, “but because we believe that our candle light can stop unfair authority.”

“I cannot agree with the opinion that the SNU’s entire school body is corrupt,” she continued, stressing Cho must “responsibly step down and stop crushing the youth’s dreams and hope” under the disguise of prosecution reform.

PSU’s third protest against Cho began at 6:30 p.m. Monday on the school’s campus in Busan, where some 50 undergraduates and graduates plus 70 Busan citizens gathered to call on Cho to step down. “I wonder if he’s the right person for prosecution reform if he’s stern against other people but lenient toward himself and his family,” said one participant.

Among a litany of allegations against Cho and his family is that Cho’s 28-year-old daughter, who currently attends PSU’s medical school, was wrongly listed as the first author of an English-language research paper published in the Korean Journal of Pathology after she finished a two-week internship at a lab in Dankook University, and used that accomplishment to gain admission to Korea University’s College of Life Sciences & Biotechnology in 2010, SNU’s Graduate School of Environment Studies in 2014 and PSU’s medical school in 2015.

Cho’s daughter also faces allegations she received scholarships multiple times at SNU and PSU despite the fact that she barely took classes at the former school and flunked two semesters in the latter.

The most recent suspicion raised against the daughter is that she was given a fake award from Dongyang University by her mother, who works as an English professor there, without the knowledge of the president of the school, and used that award as part of her application to medical school.