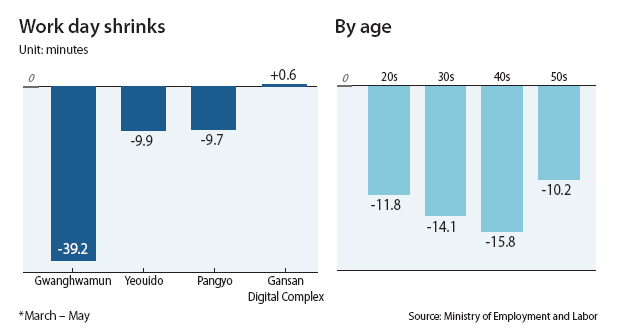 On average, Koreans are working 13.5 minutes a day less this year and are enjoying themselves 18.3 minutes more, though they are spending less time in bars and more time pursuing healthier activities.

These are just some of the changes since the 52-hour workweek went into effect last year, according to a study released by the Ministry of Employment and Labor on Wednesday.

“When you consider that on average people work for 20 days a month, it roughly translates to working 3 hours less on average a month, and when converting it to a year, this roughly results of working 40 hours fewer hours,” said Kwon Ki-seop, head of the Labor Inspection Policy Bureau at the Labor Ministry.

The study was conducted by KT and BC Card, which analyzed four areas -- Gwanghwamun, Yeouido, Pangyo and Gansan Digital Complex ? which have a high concentration of office workers.

Gwanghwamun was picked because it has numerous conglomerates, including Samsung Electronics, SK and KT, but also has several public institutions. And its work force is diverse in terms of age.

Yeouido was picked as it has the highest concentration of Korean financial companies, especially brokerages, and has the highest ratio of employees in their 30s. at roughly 39 percent.

Pangyo was chosen for its high concentration of IT companies, from smaller startups to the likes of Naver, and the average age: roughly 64 percent of the people working there are between 25 and 39.

Gansan Digital Complex was selected due to large numbers of SMEs and start-ups, while 41.3 percent of the people working there aged between 25 and 34.

By area, Gwanghwamun in central Seoul experienced the sharpest drop in daily hours spent in the office between March and May this year compared to the same period in 2018, before the 52-hour workweek was adopted.

Office workers in Gwanghwamun last year on average spent 605 minutes in the office per day. But this year, they spent 39.2 minutes less ,at 565.8 minutes.

In Yeouido and Pangyo, the drop was 9 minutes a day. In Gasan Digital Complex in southern Seoul, employees worked an extra 0.6 minutes.

“In the case of Gasan, it’s a region where SMEs are clustered and therefore didn’t have much change in the working hours,” Kwon said.

The 52-hour workweek that was adopted in July last year only applies to big companies with more than 300 employees. The shorter working hours will become mandatory for businesses that have between 50 and 300 employees starting July next year, while much smaller operations with employees between five and 50 will be required to follow the regulations from July 2021.

The study found that workers benefitting most from the shorter hours were those in their 40s. On average, people in that age group were at the office 15.8 minutes less a day, though these were people who worked the longest in the office to begin with.

Those in their 50s only worked 10.2 fewer minutes a day, mostly because they already worked less than others.

This was especially the case in Gwanghwamun and Yeouido, where people came to the office later than in the past and left work at much earlier. In the case of Yeouido, previously people came to work before 8 a.m. But since the changes, most starting to arrive at work between 8 and 8:59. More are leaving work around 5 p.m.

Spending patterns have changed as well.

People are now spending more on leisure activities and self-development as well as on cultural entertainment, such as movies.

Those in Pangyo spent 93.8 percent more time on golf, while those in Gasan increase spending on courses by 84 percent and travel by 21.8 percent.

Spending at bars, including noraebang Korean karaoke bars, is on the decline.

This spending dropped the most in Pangyo, where it was down 18.4 percent, followed by Gwanghwamun, down 9.3 percent, and Gasan, down 3.2 percent. For those in Yeouido, spending at bars was up 3 percent.