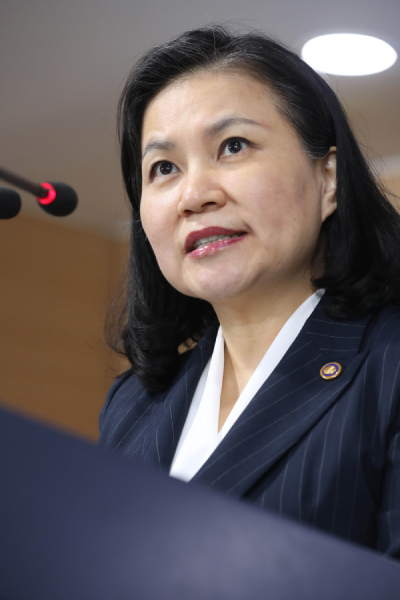 Korea filed a complaint against Japanese restrictions on exports at the World Trade Organization (WTO) on Wednesday, escalating the trade feud between the two countries to the global stage.

According to the Ministry of Trade, Industry and Energy, Korea took formal steps through the WTO in response to Japan’s measures in July that strengthened controls on exports of three industrial materials to Korea. Trade Minister Yoo Myung-hee said Tokyo’s measures violate WTO rules that prohibit discrimination and accused them of being politically motivated.

“Japan’s measures arbitrarily restrict trade for political purposes,” said Yoo during a briefing at the Seoul Government Complex in central Seoul. “The government plans to formally request bilateral consultation [with Japan], the first stage in the dispute settlement process through the WTO.”

According to Japanese broadcaster NHK, Japan’s Trade Minister Hiroshige Seko responded that Tokyo’s measures comply with the WTO and that the Japanese government will examine Korea’s claims and take appropriate measures.

Korea has argued that Japan’s export restrictions are motivated by a diplomatic row between the two countries over a Seoul court’s decision on compensation for Korean victims of forced labor during the colonial period.

Japan has cited an erosion of trust in relations and security reasons for the measures.

The export curbs target three industrial materials - photoresists, hydrogen fluoride and fluorinated polyimide - essential for semiconductor and display production. While exports of the materials from Japan took around one to two weeks to Korea prior to the measures, they are now subject to individual approval and the process can take up to 90 days.

Japan has approved exports of the materials on only three occasions since July, heightening supply uncertainties for major Korean tech companies such as Samsung Electronics.

“Considering that Korea is a major supplier of semiconductors and displays, Japan’s measures create great uncertainty and concerns to the global economy,” said Yoo.

Korea has warned that it would file a complaint at the WTO since the early stages of the conflict, which escalated when Japan last month removed Korea from its list of preferential trade partners. The move allows Japan to tighten export controls on nearly 1,200 product categories to Korea.

Seoul has responded with a similar move that downgrades Tokyo’s trade status, which is expected to take effect next week. It has also said it will withdraw from a military intelligence sharing pact with Japan in November.

The latest announcement confirms that Seoul is prepared for a drawn-out fight in the ongoing trade conflict.

If the two countries fail to reach an agreement through bilateral consultation, the dispute can proceed to a WTO panel. Countries can also appeal the ruling, and the entire process could take up to three years.

“This is an issue that will likely go to the Appellate Body,” said Cheong In-kyo, a professor of international trade at Inha University. “It is difficult to predict when a ruling will be made.”

The professor explained that Korea will face difficulties as it will have to argue against Japan’s security concerns claim.

“Korea is not at an absolute advantage,” said Cheong. “The complaint seems to be part of a broader government effort rather than trade authorities alone.”

The Korean government has undertaken measures to reduce reliance on Japanese imports, earmarking 217.9 billion won ($183 million) to foster local production of materials that could be impacted by Tokyo’s trade measures through a supplementary budget.

The government has also proposed spending 2.6 trillion won on research and development in the materials sector next year.

The deteriorating relations between the two countries have also triggered protests and boycotts in Korea against Japanese businesses and travel to Japan.

Seoul’s announcement also follows a WTO Appellate Body ruling a day earlier that told Korea to change its anti-dumping duties against Japanese pneumatic valves. The complaint was first lodged by Japan in 2015.