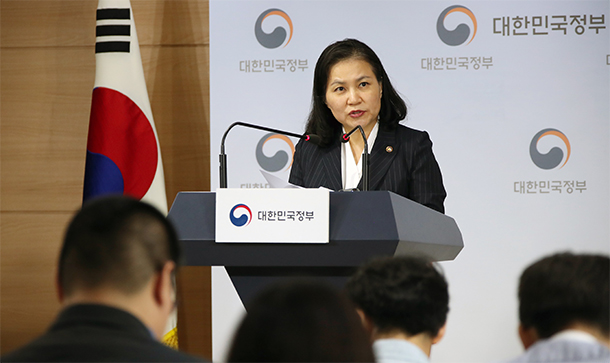 Korea will file a complaint against Japanese restrictions on exports to Korea at the World Trade Organization (WTO) on Wednesday, escalating the ongoing trade feud between the two countries.

Trade Minister Yoo Myung-hee said Korea will start to take formal steps through the WTO in response to Japan’s measures to strengthen controls on exports of three industrial materials to Korea in July. Yoo said Tokyo’s measures violate WTO rules on non-discrimination and accused them of being politically motivated.

“Japan’s measures arbitrarily restrict trade for political purposes,” said Yoo at a briefing at the Seoul Government Complex. “The government plans to formally request bilateral discussions [with Japan], the first stage in the dispute settlement process through the WTO.”

Korea has argued that Japan’s export restrictions were motivated by a diplomatic row between the two countries over a Seoul court’s decision on compensation for Korean victims of forced labor during the colonial period.

Japan has said that the measures are based on security reasons.

Since the measures were implemented two months ago, Japan has only approved exports of the materials, essential for semiconductor and display production, on three occasions, heightening supply uncertainties for major Korean tech companies such as Samsung Electronics.

Korea has warned that it would file a complaint with the WTO since the early stages of the conflict, which escalated when Japan also removed Korea from its list of preferential trade partners.

Seoul announced a similar move to downgrade Tokyo’s trade status, and said it will withdraw from a military intelligence sharing pact.