In Korea, YouTube is by far the most frequently used application. Yet despite the amount of money being spent on data plans for that video streaming habit, mobile carriers are not happy about the platform’s popularity. 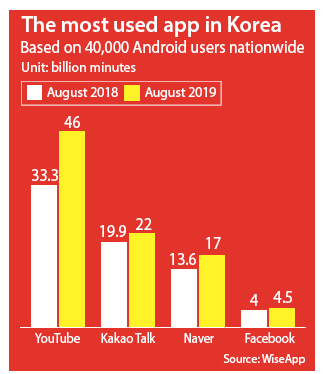 The statistics were extrapolated from data obtained from 40,000 Android users.

An individual’s average monthly time spent on YouTube last month was 1,391 minutes, or 23 hours. Teenagers spent the most time, with an average 2,500 minutes per person, followed by those in their 20s with 1,882 minutes and people aged above 50, who spend 1,206 minutes. People in their 30s and 40s didn’t spend as much, at 1,105 minutes and 847 minutes respectively.

Yet mobile carriers are unhappy with the popularity of YouTube.

The common perception is that higher data usage results in larger profit for mobile carriers as users purchase expensive payment plans to enjoy more online content, but with the sudden heavy usage of data from overseas firms, Korean telecoms companies are struggling to offer a profitable service.

“It has become a great cost pressure for mobile carriers to invest in resolving traffic with the exponential rise on global content subscribers over the past several years,” said a source from the telecommunications industry.

“Mobile carriers built the 4G LTE infrastructure for speedy data transfer, but YouTube, social media and the app market reap all the actual profit,” said an industry source who wished to remain anonymous. “That’s why telecoms companies are creating their own content in the 5G era, so as not to repeat the same mistake.”

Carriers also support the government issuing guidelines on the fee discrepancy between local and foreign players.

“[Foreign firms] are taking advantage of the fact that domestic mobile carriers are unable to artificially block foreign content providers as the key telecommunications business operators and that unstable provision of content could turn consumers away from us,” said an industry source.

Another source from the industry said, “If the government does not regulate, the financial pressure from people using the network would inevitably result in a rise in monthly fees.”

“If carriers don’t improve the unreasonable cost structure for networks, IT start-ups as well as domestic and foreign content providers and service users will continue to suffer damage,” said the Korea Internet Corporations Association in a statement.

“Even if the guideline is adopted, mobile carriers won’t be able to pass on the burden to foreign content providers, and therefore will require the cost from domestic content providers,” said a source affiliated with a local firm.